The Story of Soul; A Vegan Baby 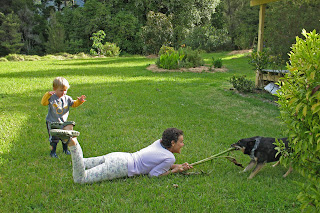 Meet Soul. Yes, that is his name. However he pointed to himself and said I’m “Baby”. For the last 5 months he demanded to be called ‘Baby’. Just recently, he said he was a big boy, so I said maybe I should stop calling you “Baby” then and just call you Soul and he agreed to that line of reasoning. He renounced his middle name that his parents chose for him and chose “Gandhi” instead! Baby Soul is 2.5 and has been vegan since conception. Spending time with him is so refreshing and healing to my spirit.

He and I hang with Kisses; our doggie friend who has been eating a vegan diet for over 10 years. The three of us play and share quality time together. One of the highest reasons I love to spend time with them is because Soul is not humancentric, unlike almost everyone else I know! He treats Kisses as a peer – he speaks to her like he is talking to a human. Soul is not speciesist. Nor is he racist or sexist. None of these headspaces have been programmed into him. That is one important reason I like to be with him. We watch his “Little Einsten” movies together – there are 4 stars; one Caucasian male, one African-American male, and two Caucasian females. He does not distinguish between the different colors or genders. He doesn’t even notice or if he does, he doesn’t say anything about it. He talks to me about all aspects of the movie except for the gender and ethnic differences of the characters in the movie. I find that really eye-opening. It shows me how much of what we adults ‘think and believe’ has been programmed into us.

When I explain to Soul why I don’t want to do something he wants to do - he has a reasoning mind. I’m astounded at the reasoning mind of a 2.5 year young person. He has a mind of his own and knows what he wants. I think his extensive vocabulary for his age has something to do with enabling him to get “what he wants”. Perhaps, in a nut shell, we learn to speak in order to get ‘what we want’.

When Soul sees me coming he sees a big giant “play object”. I like to delve into his world and become two; escape my adult perception of life. It suits us both. Having a group of mentors has accelerated his progress – he seems advanced for his age. (But what do I know? I’ve never been close to a child, never chose to bring a child to this planet.) Communal living seems the ideal way to raise children. When the parents need some space; the child can be having time with another member of the community; so he is never neglected, but always receiving quality time.

Soul is so cute; from his face to his gorgeous physique – to his angelic voice – to his adorable smile adorned in dimples – to the wise things he says and does. He doesn’t usually get sick, however some members of the community got sick on the airplane over here and he got a cold/flu/fever. Baby Soul seemed to know exactly what he needed. It seems animals and baby humans know what to do for them selves when they are sick better than human adults; the ones who think they know. We spoke to a vegan doctor and she prescribed just water and breast milk, but Soul knew this intuitively. All day long, he chose to drink mother’s milk… all day long. I tried to give him this liquid baby aspirin equivalent to reduce the fever (that his parents bought at the pharmacy) and he loudly and emphatically refused it, then went back to his sick, quiet space. I then read on a toddler medical site that any of these medications have side effects. He is instinctively wise. When he was healing, days later, he went down to the river with me and gulped and gulped the river water saying “more, more”. He has an innate wisdom that has not been damaged.

I told Soul I was writing a story about him and asked him what I should say. He answered “cucumber”. Amazing and cute, I did plan to mention that cucumbers are his favorite food. He has them for dessert every night! He eats very healthy. He has a discerning taste bud, too. If fruit is not properly ripened, he spits it out. He has a hearty appetite and loves vegan food. He tells me his favorite foods are tofu, tempeh, potatoes, pasta, peas, corn, quinoa, rice, (all topped with nutritional yeast sprinkle and olive oil), and fruit and green drinks. He knows a piggie is a friend, not food. When his mother tells him that others just don’t understand, he replies “but we understand”. He befriends horses, pigs, dogs, ducks, etc. That seems natural to a child that is not taught otherwise. The fact that I have a very good furry friend who stays by my side at all times, voluntarily, is a big enticement for Soul to want to be with me. These days, I often find myself in a clan of vegan canine Kisses, vegan baby Soul and long-time vegan“Auntie Buttereyes” as Soul calls me.

I love it when he dances with me and moves to the rhythm. We’ve danced in the river; dancing and splashing like we were doing a scene from ‘Singing in the Rain’; both so happy and in the moment. He also moves his arms to the rhythm of melodies in his movies. He likes to be a conductor. One night, when he was not yet 2, he conducted everyone in the room to a sing-along – it was quite amazing (he thought so too! He kept taking a break and running to the couch, laughing, and then coming back to his conductor position.)

When I watch a movie with him and tune into his world, he likes it so much that he will turn to me, look me in the eyes and give me a kiss. He plays a game where he hops on the couch saying “Gandhi, Gandhi, Gandhi … with each hop, and then jumps into my arms and hugs me tightly. We both seem to enjoy it. All I have to do is sit there, catch him and get a love-filled hug. When I return home after going to town, Kisses runs out howling and Soul is right behind, full speed, and jumps into my arms. The welcome committee makes their love for me incredibly visible. I love their honesty. I love hanging with them. Glad it’s not full time, though! And the most amazingly ironic thing is that I am a voice for NOT HAVING CHILREN. The last thing on Earth that Earth needs is more humans. But for all the many of you who disagree with my reasonable logic, please raise a beautiful vegan baby just like Soul. 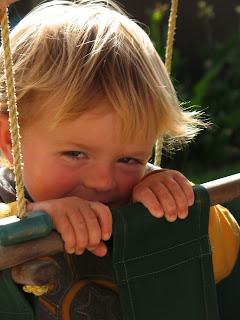