UMMMM...CAN WE GET CIVILIZED ALREADY? 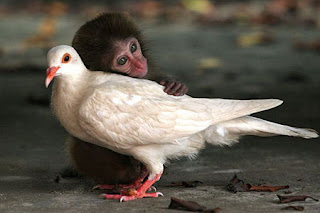 “What do I think of Western civilization? –


“I think it would be a very good idea.”
Mahatma Gandhi (1869 - 1948)
Following the Truth sometimes means breaking free of the uncivilized of your era, and ushering in a whole new world. The suffragettes had to break-free from the status quo of their day to usher in the greater gender equality seen in “Western Civilization” today. The abolitionists rejected the legal institution of slavery in North America that had a slave population of four million human beings. And now, once again, vegans are the forerunners of a more civilized humanity. Other animals have their own purpose for living that has nothing to do with being a resource for humans. They were no more made for humans than women were made for men, or one race made for another race. In a civilized society, no sentient animal would be purpose-bred and brought into existence solely for human use.

Scientific evidence corroborates what we can know with our eyes, ears, minds and hearts. Animals feel both pleasure and pain. They value their lives and they want them to continue. All species of the animal kingdom; both human and nonhuman, have that in common. Being civil towards all sentient beings has to include not enslaving and oppressing them, or stealing the breath of life from them. The domestication of animals is ancient. With domestication, hierarchy was established; with humans claiming superiority. Nonhuman-animals inherited derogatory names such as “swine”, “dirty dog” or “dirty rat”, when in reality, other animals are not dirty or lowly. Humans erroneously made them that way so they could dominate them. German Jews were called derogatory animal words to dehumanize them, in order to enable the mentality that allowed the Nazis to slaughter them. The mainstream speciesist attitude that is held towards other animals is the very thing we need to change to become more civilized.

Breaking free of society’s programming means remembering back to when we were children and we learned our ABC’s from animal characters. We liked Big Bird, Donald Duck, Goofy, Micky Mouse, Winnie the Pooh, Kermit the frog, Miss Piggie, Stuart Little, etc. Children are naturally drawn to animals and therefore movies, television and stories use animals for teaching children. However, these animals are portrayed as loveable characters that talk like humans, and then go to a ‘burger restaurant’, instilling a double message in the sponge-like mind of a small child. Society has literally taught us to be uncivilized.

Since animals have a central nervous system and plants don’t, and we can easily thrive off the plant kingdom, surely that would be a more civilized way of living. Embracing the vegan way of life is the greatest hope that human beings have for creating a truly civilized humanity that has never been seen before. We all came from caveman ancestry. We all came from an ethnicity or culture that used and ate animals. And we all have to evolve out of “where we came from” to attain ‘Peace on Earth’.

People need to take note of their own language. Is this the language of civilized people? Our vocabulary includes “SLAUGHTERhouses” – not places of amusement. Our culture also includes humans who, without shame, claim the title of “butcher”. “Livestock” would never be a word in the language of a civilized culture. Us “Civilized Westeners” eat babies, drag newborns away from their bellowing mothers, live-pluck geese for THEIR down feathers, brutally hunt kangaroos and deer because they are erroneously perceived to be a pest, vivisect on gentle, helpless bunny rabbits, farm musk deer in China and operate on the male deer to remove THEIR musk pod, hold civet cats captive to remove THEIR secretions because people like their perfumes to contain the odor that the civet uses for territorial marking, anally electrocute minks for THEIR fur coat, confine and cage numerous species just for ‘humancentric’ distorted delight, and generally oppresses whoever they can, (and here’s the key word), needlessly. Yes all for perverted pleasure, humans kill every species of animal that walks the earth, including their own. We have no physical requirement to use animals for any purpose, therefore to do so, is unjust, and therefore uncivilized. People pray for peace on Earth while they sustain their own lives off violence. Author C. David Coates makes that point this way:

“Aren’t humans amazing? They kill wildlife - birds, deer, all kinds of cats, coyotes, beavers, groundhogs, mice and foxes by the million in order to protect their domestic animals and their feed. Then they kill domestic animals by the billion and eat them. This in turn kills people by the million, because eating all those animals leads to degenerative - and fatal - - health conditions like heart disease, stroke, kidney disease, and cancer. So then humans spend billions of dollars torturing and killing millions of more animals to look for cures for these diseases. Elsewhere, millions of other human beings are being killed by hunger and malnutrition because food they could eat is being used to fatten domestic animals. Meanwhile, few people recognize the absurdity of humans, who kill so easily and violently, and once a year send out cards praying for "Peace on Earth."

Vegans would no more participate in the sexual assault, kidnapping, and/or murder of a an animal - any more than they would of a human. The human race desperately needs to realize that they can more joyful and civilized lives without inflicting death and misery in the barbaric treatment of other species.

Email ThisBlogThis!Share to TwitterShare to FacebookShare to Pinterest
Labels: vegans are more civilized

I am in no way shape or form against the type of lifestyle you are trying to attaine. But as a fellow human being, it is insulting to me when you use indefinet articals towards humans "they." "They kill" since only humans can post articals and forums. You too are a "human" and part of the human race. Therefor are responcible for all of the killing and cruelty to animals.
You are not above humans. So please keep in that in mind. Since you are so much into labeling things maybe you could come up with a label for all nonvegan humans or something.

"We have no physical requirement to use animals for any purpose"

I respectfully disagree. Veganism works... for some people. Others, however, require larger amounts of certain proteins & nutrients that currently can only be found in animals.

My partner is vegan, and I fully support her in that. At least half of my meals are vegan, and all meals we eat together are vegan. But after a year of attempting to go vegan myself, eating the same foods she did & taking the same expensive supplements she did (and that all vegans require), she urged me to go back to an omnivorous diet. I was sickly, losing muscle mass, and having difficulty concentrating. Three separate doctors - including one who was vegetarian - told me that the vegan diet was not healthy for some people, and that I was one of those people.

So, while I am against fur, real leather, and factory farming, I cannot survive without animal proteins. So I eat locally-sourced, cruelty-free eggs & cheese, as well as a good bit of fish. I am not the stramwan non-vegan this blog uses to represent all non-vegans, and neither am I willing to sacrifice my own health & the security of my family just to help someone else feel morally superior (whether deserved or not).

Intrinsic - I just don't believe it. You were doing something wrong. World champion extreme athletes are thriving on a vegan diet. You needed to consult a vegan nutritionist to work out what you should eat; perhaps different than your partner's diet. I've lived in a vegan community with 35 vegans and every single one of us got better and had health ailments go away. Not that vegan is about health or diet, but I know that with careful education as to vegan nutrition, we can all eat and live vegan.