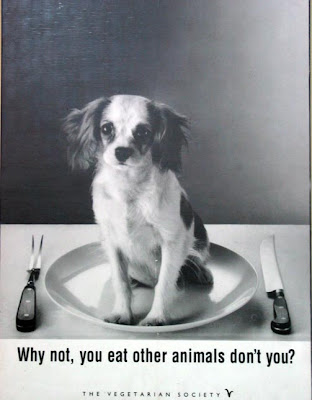 Non-vegans sometimes call vegans “holier-than-though”. The fact is that the expanded compassion and reverence for life that is the very essence of the vegan ethic - IS a more evolved, civilized or godly way of living one’s life. Vegans are no longer numb to the everyday speciesist mindset that we were all indoctrinated with. Vegans have awakened to the obvious truth that other species deserve certain basic respect, and have broken free of their misguided social conditioning. Vegans don’t comprehend the fascination people have with killing. Vegans believe that no species - human or nonhuman - should be exploited, enslaved or commoditized, and recognize that nonhuman animals should not be property status. Nonhuman animals are persons in different attire; fellow Earthlings. They have many basic similarities to us - after all, we are animals, too.

We are the supreme ‘reasoning’ animal; and yet we have the worst environmental footprint of all members of the animal kingdom. We are by far the scariest species. I find the company of nonhuman animals much preferable to that of my own species; the creator of war and violence–qualities that are not well-known to other species. The human animal is one that inflicts suffering on others. Humans need to take a good long look in the mirror. Most people like to do the right thing or be law abiding, but they live according to the laws invented by man; an imperfect, morally-lacking specimen, when they should pursue living by the laws of Love. We know in our hearts that what we do to nonhuman animals – we would not want done to us…it’s as simple as that. They do have feelings, too!

People display affection for the very animals that they pay someone to kill so they can eat the corpse. This is a peculiar sort of love. Also, people love dogs but eat pigs; an animal that is similar in intelligence. I shared life with a rescued pig – he came running over when I called his name (Promise), just like a dog. Humanity’s speciesist way of thinking is not logical. Frankly put, vegans ARE more evolved. Some will see the truth in this statement, while others will say that it sounds elitist. However, those very same people think that they are “the top of the food chain”; a rather elitist point of view. At least I don’t kill or persecute those who I believe to be less evolved!

After 31 years of being vegan and living in this world where seemingly polite people are wearing the skins of my tortured kin, it is getting increasingly difficult to tolerate the ignorance or lack of care of the non-vegan. We live in the age of information. It is very easy to educate oneself about vegan living nowadays. I’m tired of being silent when I walk by an ice cream cart that advertises “All Natural Ice Cream”. There is absolutely nothing “natural” about stealing the milk meant to turn a calf into a cow, for human consumption. We would not suck on the udder of a cow…it is completely unnatural…yet people falsely advertise and call their products the opposite of what they are. The general public needs to become better at “reading through the lies”.

I don’t think we are entitled to the “personal choice” of eating animals, as so many describe it. Because consuming animals is a horrific thing to do to other conscious beings, and because it greatly contributes to environmental devastation, and since we can live quite healthfully without animal products – we should not have “a choice” to inflict misery on others and aid the destruction of our planet. Being vegan is the right thing to do and comes with many rewards. I urge all for the benefit of all to join the “Vegan Uprising” that is emerging all over the globe. It’s with great joy that I am witnessing more and more people having their “aha moment” in regards to the vegan point-of-view. Most vegans would say that being vegan is the best thing they have done. It feels better; spiritually, mentally, and physically, and gives very tangible, and deep, meaning to our lives. As vegans, we become a part of the solution to a grave social injustice.
Posted by M. (known as) "Butterflies" Katz at 12/07/2009

You have got it perfectly right, again! I do now feel more 'evolved', more comfortable with myself since becoming vegan. Yet still people do not want to hear, and the more I say, the less they want to hear. So, I am saying less for a while, trying to live by example, people are changing, but it is so slow, I was slow myself. Thank you for your brilliant blog, it is the first I search for!

What a wonderful piece of writing, saying so well all the things I can't say myself nearly as well but that I feel in my very (vegan) bones. And I so agree, becoming vegan is THE best thing I have ever done. There is just no turning back once you have that aha moment (or actually for me a series of waves which culminated in understanding). It feels so RIGHT.

Totally agree. Good point aboout the food chain comment. As Michael above said, I'm also having trouble finding the best way to share the truth with others, even after 40 years but I am finding that as I grow older I am becoming less tolerant of the denial and the 'taboo' about talking about the truth. Bring on the vegan revolution.

Thanks for sharing such a well written and informed piece. Looking forward to reading more of your posts.

Thank you for posting this much needed dose of truth!

I am far from a perfect person, but within my veganism, I feel so spiritually clean and uplifted. I can look my fellow earthlings in the eye and not be ashamed and guilty (though I feel deep shame for being part of humanity daily, for much of what this post so beautifully expresses.)

Thank you for expressing so eloquently, what I feel so deeply in my own heart.

Thank-you everyone for appreciating. I just feel so compelled to tell THE VEGAN TRUTH!

Thank you M Bitterflies, for this post. I enjoyed reading it. I don't agree that vegans are more evolved than other humans, though, but humans aren't more evolved than other species either. We've just evolved differently. Come to think of it, since human beings have been on this earth for only a short period of time, we are in fact a lot less evolved than some species. Nature molds its inhabitants into what they need to survive. Of course sometimes the environment changes faster than a species can evolve, which means the species can no longer survive in that place.

People really need to make the connection between what they put in their mouths, and where it comes from. People need to open their eyes to the truth, and not shield themselves from it. The problem is, though, that the producers don’t want people to see, to know, because that would make them go out of business.