Our Ego-Maniacal Behavior in Relation to Animals 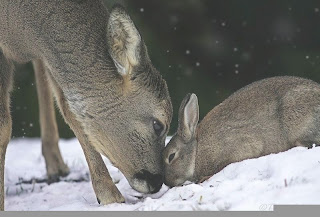 "To create suffering without recognizing it – this is the essence of unconscious living; this is being totally in the grip of the ego.” Elkhart Tolle One striking omission of Eckhart Tolle’s insightful ‘A New Earth’, as well as most other books on consciousness-raising or rising out of our egoic selves; is any talk of veganism. One of the biggest, if not the biggest, example of ego-maniacal behavior is one thinking they have the right to enslave, exploit, and commodify the lives of other conscious beings. Humans walk the Earth dressed in a human supremacy stance.

We need to speak up that a huge part of awakening to this new consciousness is awakening to the Truth that we have no right, whatsoever, to own the lives of sentient animals of any species; human or nonhuman. As a humanity, we are faced with crisis and the need to radically change – first our perception and then our actions. A great part of humanity’s out-of-control, ego-maniacal, unconscious behavior is in the believing that they have the right to inseminate, perpetually impregnate, and exploit the reproductive systems of enslaved fellow Earthlings. They torture, kill, eat and wear those they have persecuted, and without physical need to do this (as proven by the many long-time vegans around the globe!)

Great authors speak brilliantly of the human ego and the Great Awakening of Consciousness, but failed to include that being vegan is an essential component of consciousness-raising. It’s the first step, and there is no way around it. There is a Great Awakening of consciousness beginning to occur on the planet. Many are waking up to the realization that no sentient being should be considered property status of another being. All of us have divine consciousness within us and should be treated as such. Many vegans were drawn to becoming vegan because of the cruelty shown to animals, as in factory farming, etc. I was not one of them. From an early age, after experiencing the consciousness of the family cat, I knew animals deserved respect, same as any other conscious being. It’s no wonder that I grew up to be aligned with the vegan-abolitionist movement. I simply do not believe other animals are ours to use; to satisfy our unacceptable hedonism. Deriving pleasure from another’s misery is a form of insanity.

In this Great Awakening of Consciousness, we will see that it is more valuable for us to spend our time educating others about veganism; rather than campaigns that target a single issue and may not get people to ‘go vegan’ or truly understand the vegan concept. In other words, an anti-fur campaign may get some to stop buying fur (for awhile) but they are still consuming other animal products. It seems more logical to share with others the Whole Truth; which is the Vegan Ethic. Non-violent vegan education along with some accelerated enthusiasm to create our Vegan World - is the most hopeful approach to gaining rights for animals and benefiting the ‘Whole of Everything’. If it’s about the ‘cruelty shown’ as opposed to the fact that we have no right to exploit and enslave others, you give people a way out. They may stop short of becoming vegan. They may instead choose to buy so-called “humanely-raised” animal products and think they are doing enough, when in fact, they are not.

Being vegan is, ethically, the very least each human can do as far as respecting others. There’s really no time for ‘baby steps’ that some organizations applaud in institutionalized exploiters and in the general public. It has been said that when we are “Being” we are conscious, awake and out of our ego. They forgot the word ‘vegan’ after ‘Being’. In “Being Vegan” - we awaken the stream of consciousness within. Being vegan, I am part of a movement that is greater than myself, and thus gives me a focus that helps me step out of my ego. Being vegan, I’m one step closer to breaking free of the grip of the ego.
Posted by M. (known as) "Butterflies" Katz at 1/14/2010

Email ThisBlogThis!Share to TwitterShare to FacebookShare to Pinterest
Labels: Human Ego and other animals

I JUST discovered your blog! What richness it contains!

Can't wait to explore more in its pages.

I love your blog. You are so poetic, and make great points without being argumentative, negative, or all the other petty stuff I see happening in the movement.

I mostly enjoyed "A New Earth," but like you was struck by his glaring omission of any discussion of veganism. To me, it seems the ultimate egotism to believe that one's personal taste preferences are more important than an animal's right to live. I'm glad we have The World Peace Diet by Will Tuttle, which IMHO picks up the ball where Eckhart Tolle dropped it.

I'm very glad to have just found your blog. Looks like a lot of good reading here. I love Eckhart Tolle...discovered him before I learned about veganism, and I think he's one of the reasons I awakened to veganism. I, too, am disappointed that he didn't spell it out in his book, but he at least alluded to the need to stop using sentient beings. We're seeing the word more and more in mainstream writings, so there's hope. Thanks for all you're doing!!!