Vegans are ushering in Peace on Earth 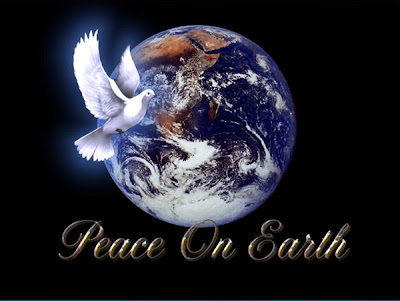 It’s the Christmas season and once again I’ll be signwriting PEACE on EARTH on shop windows. I’ll see their Christmas cards hanging in a row on a string with ‘Peace on Earth’ messages and at the very same time, look at the products of extreme violence that they have on display in their shop window. I believe people really do want Peace on Earth in their heart of hearts, but they have not figured out that they sustain horrific violence with the food on their plates or the leather shoes that they wear. Violence begets violence. We could likely end wars by feeding the world a vegan diet. We can test this theory by feeding incarcerated murderers a plant-based diet and see what happens. I've witnessed dogs become gentler from eating a vegan diet. I call it “veganizing”.

The mainstream has not yet broke free of their misguided conditioning that thinks humans are superior to other animals and therefore we can do whatever the hell we want to them; use them for our purposes, at our will. This mindset is the conformist way of thinking, but one that must be replaced because it is not truthful. In being a conformist we must ask ourselves ‘is this something I should be conforming to?’.

If we are truly a peace advocate - we must be vegan. We must live as an example to all that we can live in harmony with each other. Veganism is intertwined with the peace movement; they should be considered synonymous, in my opinion. I don't believe vegans should be terrorizing to other animals; human or nonhuman. Veganism has Peace as its foundation. The term ‘militant-vegan’ should be obliterated. It is an oxymoron. Vegans are making a stand saying we are in protest of all the violence, and we are showing the rest of humanity that people can (and should) live by a more expanded compassion and a heightened morality.

I could be less violent in my verbal communication.We all have room for improvement in removing our violent behavior, in order to literally create PEACE on EARTH. In celebrating Christmas and in the pursuit to become more God-like, Christians (and those of other faiths and beliefs) can give the gift of justice to all our wonderful four-legged friends or our feathery two legged ones, and go vegan. When I consider all the animals that are brutally slaughtered to ‘make merry’, it doesn't feel like ‘the season to be jolly’. Let there be Peace on Earth and let it begin with you (and me). Veganism is the one thing you can do today, right at this moment, to make a statement about nonviolence.
Posted by M. (known as) "Butterflies" Katz at 11/16/2009

so well put, as ever