VEGANISM: ANIMAL RIGHTS ACTIVISM and A STAND AGAINST SLAVERY 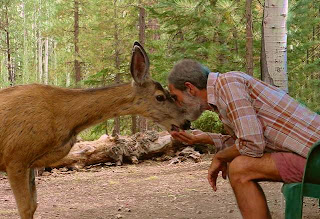 Too often, I still hear about animal rights activists who are not vegan. The way I see it, ‘Animal Rights’ and ‘Veganism’ are synonymous. You can’t logically be for animal rights and still pay someone to rape, enslave, torture and/or brutally kill nonhuman animals. On a daily basis, non-vegans (and that includes vegetarians) pay someone to do the above mentioned acts on their behalf, with their food and product purchases.

For those who want to be an animal rights activist – simply become vegan; it IS direct action. Twenty-four hours a day, seven days a week, you are actively protesting the shocking behavior of human beings towards fellow animals. Why have we not grasped The Golden Rule: ‘Do unto others as you would have them do to you?’ Why this ‘easy-to-comprehend notion’ is so hard for others to see in regards to all animal species - is an enigma.

Some animal rights people identify with being vegan but they “cheat”, as they say - they might have a little cheese while out socially. They need to keep in mind that cows are perpetually kept pregnant, inseminated by a human, and endure torturous conditions. These gentle friends have their newborn (whom they instinctively want to care for) stolen from them, sometimes, within 24 hours of birth.

Living vegan is a moral starting point for those who are an inspiration to others. It’s not difficult to be a vegan if one grasps how profoundly meaningful it is. On the contrary, when one recognizes all the suffering and damage that stems from consuming animal products, it becomes hard to imagine why people decide not to be vegan! Some activists work to save the whales, while they contribute to the persecution of cows. People want to punish others for ‘cruelty to animals’ or "animal abuse" while they're cruel and abusive to animals every day by consuming slaughterhouse products. This behavior is not only inconsistent, but speciesist.

It makes sense to spend our time, money and resources to promote vegan education, which encompasses all animal rights issues, instead of working on regulating the conditions within a system that should simply be abolished; a system that stems from a misinformed, flawed culture. We need to unite and work for empty cages, not better cages. I don’t want to be a part of extending ‘a pat on the back’ to mega corporations responsible for misery and death imposed on nonhuman animals day after day, year after year, because they enlarged the prison stalls where they hold innocent animals captive or because they agreed to use cage-free eggs. It makes more sense to educate and change the mindsets of the public; the purchasers, who are creating the demand for these products, by paying businesses to callously exploit non-human animals.

Vegans do oppose factory farms, of course, however if there were no factory farms, most vegans would still be vegan. It’s not about whether the process is “humane” or not. Veganism is a protest against a speciesist society that believes nonhuman animals were put here for our use, to be our property, to be subjugated by us; regardless of whether they are “humanely” raised or not. There is absolutely no such thing as humane enslavement, exploitation or murder.

There is nothing “humane” involved in animal husbandry, even if products are labeled “humane”. The “humane meat labels” are merely marketing schemes to make people feel good about themselves while they are still directly supporting cruelty. So called “humanely raised” animals have a number of torturous practices inflicted on them. Even when "free-range" farmed animals are allowed to live outdoors, they're still subjected to excruciating mutilations without painkiller, such as castration, branding, dehorning, tail-docking, and de-beaking. They are still slaughtered in the same violent way as factory-farmed animals. Sentient beings are filled with fear as they are prodded down a narrow chute. They can hear and smell what is happening to others before them, they desperately try to turn around, but can’t, until it's their turn to be hung upside down by one leg on a conveyor belt, to have their throat slit. Some are dismembered while still fully conscious. The whole abysmal system must be abolished and that is the only solution worth working towards.

We must work towards all forms of slavery and oppression being abolished! This includes; child slavery and indentured servitude in the coffee and cocoa industries of the Ivory Coast of Africa, women and children in Sudan, child carpet slaves of India, forced marriages, debt bondage in Southeast Asia, human trafficking to serve sexual slavery, forced labor, or child soldiery, and the mass enslavement of nonhuman animals of this world. All species of animals; both human and nonhuman deserve the right to live their portion of life free of enslavement and exploitation.

Estimates from various anti-slavery organizations range from a staggering 2.7 million to 27 million (human) slaves in the world today– more than any time in history! (These numbers are comprised of debt bondage/bonded labor slaves, forced labor slaves, trafficked slaves; slaves who were coerced or deceived then transported into a forced labor or debt bondage situation.)

The numbers of nonhuman slaves seems beyond calculation. According to the U.S.D.A. records of 2007 - 10,357 million land-based animals were raised and killed for food (in the U.S.). (This does not include fish or other aquatic animals.) Another 250 million animals were killed for “sport,” in vivisection laboratories, in pounds, or as “pests.” These statistics cover just one year in just one country. Thus far, the history of humanity is appallingly oppressive. It is difficult to stop the slavery in Sudan if you are living in the U.S., however, in most places in the world, one can choose to live vegan - a universal protest against slavery. Vegans do not pay someone else to enslave, rape, exploit and kill sentient beings.

The condition of cows exploited for their milk is often hideous. It is pitiful to see humans so coldhearted and not in touch with their natural feelings of empathy; so much so that they could be complicit in such crime against nonhumanity. We cannot rise to who we are really meant to be, if we are inflicting (or paying someone else to inflict) misery and suffering on others. We free the animals and our own higher nature by living vegan.

Email ThisBlogThis!Share to TwitterShare to FacebookShare to Pinterest
Labels: Anti-Slavery