Chimp speaks in Sign Language - what does she say? 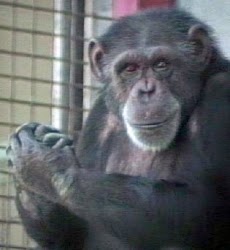 Please keep in mind that I don't agree that chimpanzees are more deserving of basic liberty over other animal species because of their intelligence, nor do I believe we have a right to use animals, like Washoe, for experimentation. However, I found the following clip to be very powerful and have saved it through the years. The article was published in a Los Angeles newspaper, on January 1, 1980 by Paul Harvey; nationally syndicated columnist (now deceased).

I've just endured one of the most cold-sweat experiences of my life. I heard the “voice of an animal”. Any hunter has heard animals cry before they die, yet we keep hunting. If that wounded animal instead looked up at us and through bleeding lips said, “Please don’t kill me”, could we then kill so casually? Would it make all that much difference if the animal could talk? I’m asking – because they can now. Pulitzer Prize winner Dr. Carl Sagan said it. “How smart does a chimpanzee have to be before killing him constitutes murder? Indeed how smart would any animal have to be?” My new perspective on this matter came on recently and rather suddenly. I have always contributed what I can to animal rescue efforts. I am inclined to anthropomorphization of family pets, dogs, and cats. In recent years I have racked my considerable arsenal of hunting guns. I just don’t feel like killing anything any more. Yet I get a letter from Mr. Carbin in Fayette, Iowa, which says: ‘Hey, Paul Harvey, you eat your steak, your trout, your pork chops, your pheasant under glass—because somebody else did your killing for you. How do you justify that?’ I can’t justify it if I let myself think about it. Now something’s happened that demands that I think about it.

When I relate my experience of having heard an animal “talk”, I am not referring to the mimicry of a parrot. Here’s what happened. My son, Paul, researching a “Rest of the Story” story for broadcast, became acquainted with a research project at the University of Oklahoma. There they have been teaching an animal to talk---specifically a 15 year old female chimpanzee named Washoe. This is the basic recognition communication, mostly single unit: big, small, up, down. Since 1966 this chimpanzee has learned 140 signs in Standard American Sign Language. After all this learning and more learning, the project directors decided that Washoe was prepared now to “conceptualize.” In lay language, instead of imitating some human’s words—the chimp was ready to express thoughts of her own. She had learned enough words to cross-reference those words and “originate” expressions of her own. Now, understand Washoe is a pampered animal in the University Laboratory – well fed, physically comfortable, safe from harm. She had “security”. And yet—when she was able to put words together on her own into a phrase—these were the first three. And she has said them again – repeatedly. To visitors the voice from the cage is saying: “LET ME OUT!”

Author's note:
Washoe was really not safe from harm, as Paul Harvey mentioned.
She was exploited and enslaved by humans
and unjustly imprisoned.