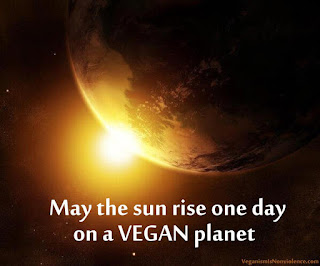 I do not understand the human race. When I was a young girl and learned that people ate animals, I was in shock...."people eat animals? I don't get it. What?" said me, at age 12.  I never grew out of that way of seeing. You not only eat them, but you use them to experiment on, to entertain you, to ride on and hurt their spines, to skin them so YOU can wear THEIR skins, to poison, to purposely breed for your profit, to sexually violate (artificial insemination), to routinely kidnap their babies at birth and then torture and kill those newborn babies, to labor for you like a slave, to oppress, to objectify them so you can commodify them, to humiliate, imprison, cage, own... - or - pay others to do this all on your behalf.


I say YOU because I opted out of supporting this behavior towards other feeling beings.

You support all this, BUT you don't have to!

And for this reason, I do not understand the human race. Does your conscience not demand of you what mine does? How can anybody think it's fine to be violent to other animals? And yet there's a whole world of YOU out there who totally accepted "the programming" and societal indoctrination, and religious holy scriptures that are outdated, because now we can live vegan. Surely any righteous God would want people to live harmoniously with other humans and other species; not violently and disrespectfully. Surely anyone; any divine almighty being or any human being would choose not to assault and harm someone when there is no necessity to do so...this seems so obvious. Going vegan is such an obvious right. So why are vegans still the minority? Long term vegans have scientifically proven we humans can live vegan. Vegan super athletes have proven we can even find superior fitness as a vegan.
Hopefully in 2017, nonvegans will stop with the unjust deragatory words and thoughts towards vegans, and instead become one themselves and be a part of the uprising, get on the right side of history-in-the-making. Join hands and hearts with other vegans worldwide as we expand and forge ahead towards that tipping point when veganism becomes the accepted norm within society. Because honestly, it is - it's just normal not to want to be violent to others; all others.
To be vegan just means you live by the belief we humans should not hurt and harm animals. Shouldn't that be everyone? Get with the times. Let go of the old and really get NEW this year; 2017. Vow to be vegan, forever.

Wonderful. Thank you.I could show this to people I know who aren't vegan and they wouldn't care. I don't know what it takes.... maybe just real compassion.