A Message to NEW Vegans

When I became vegan 37 (pre-internet) years ago, there was little information available and we didn't know if the vegan way of life would even be beneficial. We didn't know if vegans could remain healthy without eating any animal products. Thirty-seven unwavering vegan years later - I hope to inspire you and let you know that we CAN live vegan, long-term. We certainly can live without intentionally inflicting violence on other animals. We can make a stand and not be a part of the cruelty of needlessly enslaving, objectifying, and assaulting fellow feeling animals. We can be forerunners of a world where anyone sentient has their basic birth rights respected, because they are perceptually-aware, conscious, and feeling. Unlike plants and objects, animals; both human and nonhuman, have the capacity to suffer and the desire to want to live ~ and to live free from harm. 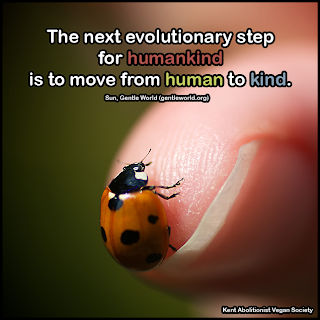 Embarking on the vegan path, you are committing to being a part of the solution to what ails our planet; violence, oppression, slavery and environmental devastation. We can be pioneers of a cleaner, healthier and less violent world. We can be animal rights advocates by living vegan and educating others. We can literally stop demanding animal exploitation with what we financially fund. Veganism is a consistent ethic as it extends to every facet of our lives, from what we eat, to what we wear, to the toiletries and products we buy, to the practices we literally support. And though it may initially feel daunting, once we learn which new vegan products (no animal derivatives and not tested on animals) to buy, which food staples to consume and which vitamins to ensure we are consuming, and what not to support (circuses, zoos, breeders, etc.) – vegan living becomes second nature. Some think becoming vegan seems difficult, but when we focus on the victims (animals) – living vegan becomes routine and not being vegan is no longer an option. I know with all my heart and soul that living vegan is the right thing to do and I let it guide my life. 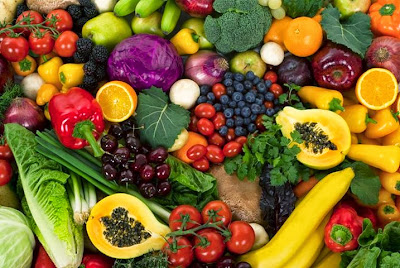 You can look forward to walking the earth with this same satisfying feeling one day soon. There are rewards for you too. I've not needed to take a pharmaceutical or visit a doctor, hardly ever. I once lived with 35 vegans and every one of us felt our health improve after we became vegan. There’s no health guarantees, but chances are – if you eat a balanced whole foods plant-powered diet ensuring you get all necessary nutrients, you will become healthier. What you need to know in a nutshell: supplement with sublingual vegan Vitamin B12, get some sunshine every day for the natural and optimal way to obtain Vitamin D (and if you don’t get sunshine, please supplement with Vitamin D2, or one of the new brands of vegan Vitamin D3; which is generally not vegan), have a daily intake of omega 3 fats in the way of walnuts, flax seeds, chia seeds, hempseed, purslane, etc. or supplement with algae-derived DHA/EPA supplement sometimes, eat calcium rich foods like dark leafy greens and almonds on a daily basis, eat iron-rich foods, and check your iodine if you are not eating seaweed or iodized salt. Don’t be scared by these recommendations – if you check the ingredient lists of nonvegan foods, you will see they are fortified; vitamins added in. Studies say that animal-food-consumers have to watch out for many nutrients that they are not getting that vegans have no intake problems. I just want you to be optimally healthy – and we have figured out from studying vegans – what exactly you should check and ensure there is no deficiency. Eat plenty of raw fruit and salad. Particularly beneficial foods for vegans to include are broccoli, walnuts, tempeh, quinoa, abundant dark leafy greens, hemp-seeds, orange colored vegetables like sweet potatoes, butternut squash, or cooked carrots – as we vegans make our Vitamin A converted from beta-carotene. Here are 40 vegan foods and their health benefits – to help you decide which foods to eat. Finally, it would be beneficial to include sauerkraut (raw and homemade is best), kefir in plant milk, kombucha; fermented foods in your diet.

Thank-you for stepping it up and making a stand, because increasing the number of vegans on Earth will help heal the planet and all its inhabitants. When I became vegan, I didn't know any other vegans and it’s a real joy to know that I'm no longer alone and that more and more people are becoming vegan every day! We're on our way to making history!

Humanity adopting vegan living is the most significant social justice movement of our time, with the most far-reaching ramifications for a better, brighter world, and quite possibly the greatest hope for even having a future of life on Earth. According to the United Nations, Farming animals is the biggest culprit in global warming; which, according to some scientists, is a very serious threat to human life on Earth. Animal “agriculture” is also a major problem in environmental devastation and using up natural resources. 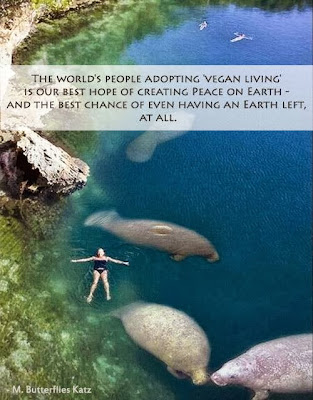 Most of the plants we grow are inefficiently cycled through animals - unnecessarily, when they could instead be fed to starving people, and we would then stop purposely breeding animals into existence only to be oppressed slaves. We can eat a plant-powered diet to combat environmental devastation and global warming and to live healthier, but we are vegan for the animals and opposing exploitation of anyone sentient. It turns out that vegan living has the potential to cure our ailing planet, both environmentally and sociologically. Human temperament will become less violent when people stop consuming death, misery and violence.

Email ThisBlogThis!Share to TwitterShare to FacebookShare to Pinterest
Labels: A message to NEW vegans

Thank you for breaking this down to people who are considering becoming an ethical vegan.

I was saying to a group of vegans I have finally managed to find that as a newbie I felt very lucky because of all the vegans who had gone before and tested what to eat etc. It has made this transition much easier -thank you for being one of the vegans I was talking about!

Love the photo with the manatees - beautiful gentle giants - lovely!

Very interesting article. However, as we become more "sentient" and as research has shown, plants feel pain too. So it's not just the cute and fluffy piggies, lambs and assorted warm-blooded creatures we need to forsake eating but also the variety of plant life which sustain a vegan lifestyle. So, where does this leave us? We have to collectively raise our vibration to becoming breatharians and sun-gazers (assuming chemtrails will let us actually do either or both of these non-violent practices)...

To Sun Gazer, I don't believe plants feel pain. They don't have a nervous system, a brain or pain receptors. They respond to stimuli, but they are not sentient. However, I agree with you that they are to be respected. I don't cut flowers. I don't cut trees. I am a sun gazer. But I would not put animals and plants in the same sentient category.

"Butterflies" Katz - who are we with our extremely limited consciousness and over-inflated sense of ego to decide whether anything at all feels pain? Not having a nervous system does not instantly mean there is no pain. We cannot and should not reference everything else on the basis of our woefully limited perception of creation. Here is an interesting video which shows that plants respond to stimuli and indeed transmit electrical impulses through their system (which after all is what a nervous system does): http://www.youtube.com/watch?v=fGLABm7jJ-Y

Thank you for pointing out that plants don't feel pain, Butterflies ! I can only assume that Sungazer, was joking :-)
Great article, too. What really bothers me about other articles is that they drone on and on about factory farming, promoting "cruelty free" as a better option. Both are wrong on so many levels, and one that never gets mentioned is the environmental damage that is caused by farming animals, especially free-range, grazing animals. I wish the details of this were mentioned more often. Maybe people who continue to condone slaughtering animals would stop eating them if they realized what it's doing to the environment.

Raw is the way foward.... thru personal experimentation, fruit meals, big leafy salads, sprouts.... the occasional nut.
having lived on every continent except south america (& Antarctica) and always eaten as a native wud, including england.. *puke*
I know when I am feeling good/strong/healthy/crap.... then going thru the ovo-vego to vegan to raw vegan, and doing a lot of sport, I know my body
Never blowing your nose, peeing clear all day, jumping out of bed early with energy to spare, increased strength, speed, endurance, flexibility, recovery speed..... clear eyes, limited or no TP, quick easy BMs, hardly any dishes to wash.
I don't supplement, but will get some bloods done at some point.

This link popped up in my past FB post of the day and I just wanted to let you know that I love the way you have explained Veganism on this page and I also agree with you on all of your responses to the comments above. Peace, Love, & Vegan.

It's basic biology. If you want to find excuses to keep exploiting animals, this is one of the lamer ones