Vegan Essentials started out in 1997 as a mail-order printed catalog business, and moved from paper catalog to online, in early 2000. They have been the winner of Veg News Magazine's Veggie Award for "Best Online Store" for the past 7 years, and have won "Best Vegan Shoe Store" the year prior. Here, Ryan and Courtney; owners of Vegan Essentials, answer a few questions: 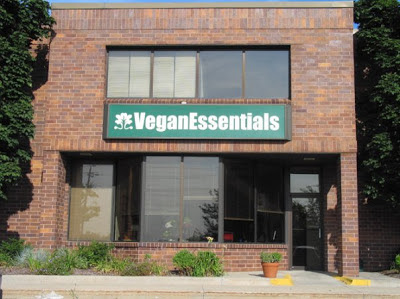 Tell us something of interest about yourself...

People always are interested to hear the original factors that lead VeganEssentials - it all started back when Courtney first came down with a horrible case of food poisoning after eating chicken, as soon as she recovered, she thought about what caused it and realized that anything that could make her that sick, she didn't want to eat. So, she went vegetarian right away, then after reading numerous books and articles regarding veganism while first being vegetarian, it only took a few weeks for her to decide that she didn't want to eat or live in a way that brought excessive harm to our animal friends. So, from that, she quickly went vegan and never looked back!  One thing that most people don't know about Ryan is that he has been one of the first people who worked hard to make a strong push for people to recognize vegan athletes. As someone who has competed in various strength sports for over a decade including power-lifting and strongman competitions, he made it his goal to help spread the word that vegan eating is great for athletes and not a detriment as so many had previously thought, which has helped pave the way for the current rapidly-growing movement of new vegan athletes that are taking over! 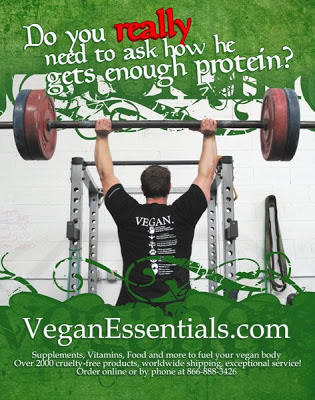 What were the reasons behind starting Vegan Essentials?

VeganEssentials formed when Courtney realized back in 1997 that there were few options for vegans to be able to get the best items all from one convenient location. Back then, it was much more difficult to find great vegan items, especially for those who didn't live in larger cities, so she opted to create her own business to make veganism easier and accessible for people who have been seeking the best products but don't always have easy local access to them.

Are the employees all vegan?

Currently, all but one are vegan, and she's a vegetarian in the works for going vegan!

Give us an overview of your items for sale?

We stock over 2,200 different all-vegan items at VeganEssentials.com, and try to offer a bit of everything that both new and experienced vegans alike would be interested in. We offer everything from food and sweets to footwear and non-leather accessories, vitamins and supplements, cosmetics and facial care, bath and personal care items, shirts, books, DVDs, and just about anything else you can think of!

What are your specialties as far as items?

By far, our specialty is food, primarily unique and hard-to-find vegan alternatives that might not be easy to come across, sometimes we're the only store in the nation to stock something that's REALLY unique, as well as items we import in from Europe. If you're looking for a great vegan cheese alternative, we have over a dozen options to suit just about any need. Looking for something to satisfy your craving for sweets? We've got hundreds of choices for fun and tasty snacks and treats. If you're in need of staples, we've got those as well, so food is definitely where we shine!

Tell us about some new products you are now offering.

We'll finally have the new 'Beyond Meat' line of products online in the coming week - despite Whole Foods originally having a lock on this awesome brand for many months, we were able to get an early delivery on our supply and we know it's going to change the way vegans think about meat alternatives!  We also have been selling a LOT of the new Daiya cheese slices; the Swiss flavor is simply amazing and something sorely lacking in the vegan world for far too long. And, the new line of snacks from Earth Balance has been the runaway hit for this spring - I can't believe how much of it we sell, but I guess when a company releases a vegan white cheddar popcorn, it's bound to be a smash hit!

Conclude with a message to the world or a bit of your philosophy or a quote - regarding the vegan ideal.

Our mission at VeganEssentials.com has ALWAYS been to treat our shoppers the way we'd want to be treated, so we handle each and every order as it we were preparing it for ourselves. In this era where service seems to be sorely lacking, communications are not always what they should be, and companies far too often put themselves above all else, we never forget that without the support of the community, we would not have the gift of being able to work in the vegan world the way we currently do. When our suppliers do more for us, we pass that savings on to our shoppers, as we know that everything we do to help those who support us helps the whole community. Nothing makes us happier than being able to do more and more to help those who have been here to help us get to the point we're at. If we're not looking for great new products to bring in to increase the range of what we can offer to the vegan community, we're fighting to get our prices lower in every way so that we can help thank those who support us. We just want everyone in the community to succeed while helping create a kinder world at the same time!

Simple to the point and informative, enhances my knowledge a lot...