English and Speciesism by Joan Dunayer 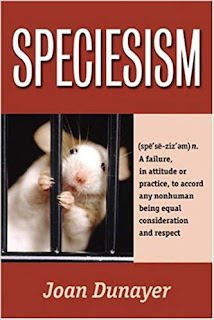 Standard English usage perpetuates speciesism, which is the failure to accord nonhuman animals equal consideration and respect. Like racism or sexism, speciesism is a form of prejudice sustained in part by biased, misleading words. However, whereas racist slurs rightly elicit censure, people regularly use, and fail to notice, speciesist language. Unlike sexist language, speciesist language remains socially acceptable even to people who view themselves as progressive. Speciesism pervades our language, from scholarly jargon to street slang. Considered in relation to the plight of nonhuman beings, the words of feminist poet Adrienne Rich express a terrible absolute: "This is the oppressor’s language."

Speciesist usage denigrates or discounts nonhuman animals. For example, terming nonhumans "it" erases their gender and groups them with inanimate things. Referring to them as "something" (rather than "someone") obliterates their sentience and individuality. Pure speciesism leads people to call a brain-dead human "who" but a conscious pig "that" or "which.'

Current usage promotes a false dichotomy between humans and nonhumans. Separate lexicons suggest opposite behaviors and attributes. We eat, but other animals feed. A woman is pregnant or nurses her babies; a nonhuman mammal gestates or lactates. A dead human is a corpse, a dead nonhuman a carcass or meat.

Everyday speech denies human-nonhuman kinship. We aren’t animals, primates, or apes. When we do admit to being animals, we label other animals "lower" or "subhuman." Dictionary definitions of man exaggerate human uniqueness and present characteristics typical of humans (such as verbal ability) as marks of superiority, especially superior intelligence.

Nonhuman-animal epithets insult humans by invoking contempt for other species: rat, worm, viper, goose. The very word animal conveys opprobrium. Human, in contrast, signifies everything worthy. Like the remark that a woman has "the mind of a man," the comment that a nonhuman is "almost human" is assumed to be praise. Both condescend.

While boasting of "human kindness," our species treats nonhumans with extreme injustice and cruelty. Directly or indirectly, most humans routinely participate in needless harm to other animals, especially their captivity and slaughter. Whereas true vegetarianism (veganism) promotes human health and longevity, consumption of animal-derived food correlates with life-threatening conditions such as heart disease, cancer, and hardening of the arteries. Still, our language suggests that humans must eat products from nonhuman bodies. As if we possessed a carnivore's teeth and digestive tract, thoughtless cliché places us "at the top of the food chain."

To speciesists, needless killing is murder only if the victim is human. In animal "farming" and numerous other forms of institutionalized speciesism, nonhuman animals literally are slaves: they’re held in servitude as property. But few people speak of nonhuman "enslavement." Many who readily condemn human victimization as "heinous" or "evil" regard moralistic language as sensational or overly emotional when it is applied to atrocities against nonhumans. They prefer to couch nonhuman exploitation and murder in culinary, recreational, or other nonmoralistic terms. That way they avoid acknowledging immorality. Among others, Nazi vivisectors used the quantitative language of experimentation for human, as well as nonhuman, vivisection. Slaveholders have used the economic language of farming for nonhuman and human enslavement. Why is such morally detached language considered offensive and grotesque only with regard to the human victims?

The media rarely acknowledge nonhuman suffering. Only human misfortune garners strong words like tragic and terrible. When thousands of U.S. cattle, left in the blazing sun on parched land, die from heat and lack of water, reporters note the losses "suffered" by their enslavers.

Belittling words minimize nonhuman suffering and death. As expressed in a New York magazine caption, antivivisectionists "oppose testing on any creature—even a mouse." The word even ranks a mouse below humans in sensitivity and importance. There's no reason to believe that mice experience deprivation and pain less sharply than we do or value their lives less, but our language removes them from moral consideration. Who cares if millions of mice and rats are vivisected each year? They're "only rodents." What does it matter if billions of chickens live in misery until they die in pain and fear? They’re "just chickens."

In speciesism's fictitious world, nonhumans willingly participate in their own victimization. They "give" their lives in vivisection and the food industry.

Positive words glamorize humans' ruthless genetic manipulation of other species. Horses inbred for racing are "thoroughbreds." However afflicted with disabilities, dogs inbred for human pleasure and use are "purebreds," while the fittest mixed-breed dogs are "mongrels" and "mutts."

With complimentary self-description, humans exonerate themselves of wrongdoing. Food-industry enslavement and slaughter cause suffering and death of colossal magnitude. Yet, consumers of flesh, eggs, and nonhuman milk count themselves among "animal lovers."

Currently, misleading language legitimizes and conceals the institutionalized abuse of nonhuman animals. With honest, unbiased words, we can grant them the freedom and respect that are rightfully theirs.

Joan Dunayer is a writer whose publications include articles on language and animal rights. Her work has appeared in journals, magazines, college English textbooks, and anthologies. A former college English instructor, she has master’s degrees in English education, English literature, and psychology. She is the author of Animal Equality: Language and Liberation (Derwood, Maryland: Ryce Publishing, 2001, distributed by Lantern Books), the first book on speciesism and language.

That was a truly fantastic article; thank you for sharing. I try to open as many people's eyes as possible to the truth about speciesism, and that one day we will all look upon the abuse of fellow animals in the same way as the slavery of other races and sexism.
Crystal

So true! It has only been the last 6 of my 46 years that I have recognised the EQUALITY of non-human sentient beings. People think I am crazy when I say I respect spiders/mozzies as my equal - or talk to the pigeons/sparrows that visit my windowsill.

yes I too respect all sentient life forms as my equals and in fact enjoy sharing the earth with them. I became vegan about 13 years ago and now can see more and more the intelligence in animals and other creatures, if you allow yourself to really look and see you will see they have feelings, love, fear, thoughts and we do not have the right to destroy them or use them as objects. GO VEGAN

Powerful and eloquent essay. Thank you so much.