Kisses, my canine companion, came to me from the forest that surrounds us. Someone dropped her off in the bush, and I found her. It was 2 days before Christmas. (People abandon their unwanted animals and get new ones as Christmas presents). I had just moved to New Zealand from the U.S. and have always cherished living with vegan dogs, so I was wishing for a “rent-a-dog”, since I don't stay put all year round. But what I got was “a keeper” (no one wanted her as she was neurotic from her abusive beginnings). We’ve been together for over 12 years.

I could have left her there when I first saw her (though that never occurred to me in that moment). She had flowing clean water, bird’s eggs, remains that she could scavenge, and small animals she could kill that she could have survived on. I’m told that some vegans don’t believe in having “pets” nor even 'rescued animals', which other vegans find confusing.

I reflect and contemplate that if I left Kisses in the woods, she may or may not still be alive and she would have undoubtedly taken the lives of other smaller animals. Being with me, she never has to worry about predators, lives freely in a country setting, and receives tummy rubs and someone to warmly sleep with at night. She is fed vegan food; so no other sentient animals had to suffer and die to feed her. She had the privilege of being in love with a human and I had the honor to be in love with a canine.

One of my greatest joys has been the interspecies relationships I’ve experienced. Other animals feel our veganism. Vegans that think we should not rescue other animals and live with them are missing out on the gratification of saving a life. I’ve seen my friends rescue an animal from a snake’s mouth, from the grip of a hawk, and from the heartlessness of humans. One scene I’ll never forget was on a Florida highway; a friend of mine had both hands on a large turtle at the same time a woman had her hands on the other end of the turtle; they were both tugging back and forth. She wanted 'turtle soup' and didn’t believe that he wanted to save the turtle and set him free. We set the turtle free!

I personally have a philosophical problem with rescuing an animal, to then feed him/her other animals; whether they have already been killed by someone else, were farmed by humans, or were living free in the natural environment. I don’t want to be complicit in the murder of other sentient beings. However, when I was faced with a cat about to be euthanized right before my eyes, I saved him. I’ve always loved the feeling of saving animals since I was a young girl. I don’t “own” them (even literally). I will not purchase an animal as if they were a commodity. Other animals (definitely not the human ones) seem to be drawn to me. I’ve had the great pleasure of living with various species of rescued animals including many dogs, a crippled goat, a friendly pig with a neurological disorder that made him spin in circles, many rabbits, doves and other birds, horses, a pony, roosters, (and felines briefly until I can find them a more suitable home). I’ve also lived in a forest where I befriended wild animals and fed them from my hand and petted them; including deer, ground squirrels, chipmunks, and ducks. They were all fed vegan.

I avoid living with non-vegans of any species. However, if a particular animal (such as a cat) must have animal products to survive, they must be given that (but not by me!). I want my own little world to be a vegan world. Whether an animal has evolved as a carnivore, I believe, they can evolve further, with our help, to thriving without killing other sentient beings. Three decades ago, vegan dogs were unheard of, and now many people have successfully fed dogs a plant diet.

We had birds that lived in our screened in patio, and we opened the door to let them fly freely in the sky - they always returned to us. I know if given the choice, Kisses would stick with me. She could easily run away and live freely in the neighboring forest. She chooses to live with me. What a gift to be close friends with other species of animals. I cherish these friendships. So yes, we should rescue and give shelter and care to animals in need, but we should not breed more animals into a domesticated existence. 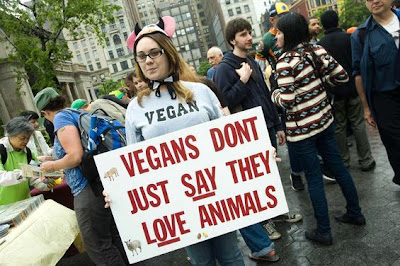 Hey,
Regarding cats I think that you should keep them if you can.
I feed my cat and my cats in the past a completely vegan cat food and they're very healthy.
TRY IT!

What kinda diet do you feed your cat, most cats are meat eaters that is why they have meat in their food. I would be interested to know as i know vegan people, I am vegetarian.

There is a blog on my site of someone feeding his cats vegan, in Australia.

I have fed them mashed tofu, with yeast, oil, and seaweed. They often like chick pea mashed and squash.

VegiPet gives recipes and then you add the Veggie Pet powder supplements to the food.

I've heard of cats that eat plant-based and are living and healthy. I've heard the opposite too.

Cats are obligate carnivores. Deal with it. There is nothing inherently wrong with the consumption of animal protein. But there is a LOT wrong with your delusional beliefs that there is.

And there are cats that are obligate vegans, and thriving vegan for their whole life. So deal with that.

Nothing delusional about love and wanting to bring peace.

Butterflies, I love your story about how you and Kisses came to be friends, it moved me to tears. Wonderful post!
~Flavia