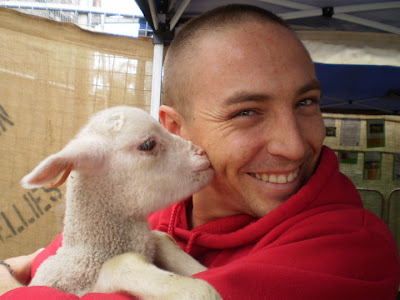 All over the world, people are adopting a way of life that excludes violence towards other animals. They have feelings, too. Why would anyone want to contribute to needless suffering? Major health organizations such as The American & Canadian Dietetic Associations state that appropriately planned vegan diets are healthful and provide benefits in the prevention and treatment of certain diseases. A vegan diet is appropriate for individuals during pregnancy, lactation, infancy, childhood, adolescence, and for athletes. Therefore, humans have no physical need for consuming animal products.

We now know that consuming animal products is completely unnecessary. Many long-time vegans are living proof that humans do not need to eat animal products, wear animal skins, seek scientific data from, or be entertained by, the oppression of other animals. Many vegans report an increase in self-esteem and awareness. Many also become more informed about nutrition, more concerned for our environment, and more connected with other species. In addition, many report experiencing greater mental clarity and physical energy, fewer colds, and less illness in general.

The Reality of Dairy and Eggs

We are the only species that drinks the milk of another species; a totally unnatural act. Dairy and egg production unbearably exploits the female reproductive system of cows, hens, (and goats). In order for us to obtain her milk, a cow is perpetually kept in a state of distress and physical discomfort. She is forcibly inseminated and kept pregnant so we can steal the milk that was, by nature, meant for her calf. In most cases, her calf will be taken from her within a day of birth. This heartless practice causes much suffering to both mother and child. The calves are then killed either immediately after birth or kept immobilized in crates until slaughtered for their flesh. The dairy, meat, leather, and veal industries are all dependent upon each other. Those who consume dairy products pay someone to inflict suffering and death on cows and calves. If a person cares about animals – becoming vegan is the first step.

Institutional exploiters of animals take the lives of sentient beings and turn their bodies into commodities – even training slaughterhouse workers to think of animals as lifeless objects. Commercials convince the public that cows are happy to give us their milk, when in fact, they are brutalized and butchered.

Hearing the cries of those before them, cows try to turn around in the narrow chutes they are prodded down to meet their death, but they can’t. Ex-slaughterhouse workers have reported that pigs scream and look their killers in the eyes asking “Why are you doing this to me?” A child would approach a lamb to “pet him/her”, not “eat his/her leg”. With the help of our misguided indoctrination, we have disconnected from this simple truth.

Promoting ‘vegan living’ is the best approach anyone can take to help animals. In becoming vegan, we become one who protests against rape, slavery, violence, kidnapping, and killing, in our daily lives. Many vegans feel compelled to educate others and help them to become vegan; a way of life (not a diet), that opposes all animal exploitation and oppression.

Vegans don’t support practices or consume products that ask an animal to breed, work, entertain, suffer or die for them. Don’t be deceived by “humane” labeling of animal products. It is dishonest; there is no such thing as ‘humane’ enslavement, commodifying lives, and slaughter.

Educate yourself with the support of online vegan communities. Vegans enjoy bountiful plant-based options. Learn about the nutritional aspects of the vegan diet to be sure you stay healthy. After a few weeks of learning new food staples and replacement products, vegan living becomes second nature.

* Live Vegan, and learn to co-exist with other species and challenge our culture’s speciesist attitude.
* Live Vegan, and know that nothing valuable could ever come from inflicting suffering on other sentient animals.
* Live Vegan, and extend one’s circle of compassion to include all animals and live with reverence for life.
* Live Vegan, and respond to a grave social injustice by embracing the most ethical stance one can take to protest the state of the world.
* Live Vegan, because it is a moral imperative. Unlike some other animals, we humans do have a choice and can live without taking other sentient animals’ lives to sustain our own. By supporting animal husbandry, we are contributing to the greatest culprit of environmental devastation and to global warming.
* Live Vegan, and practice non-violence. Being vegan is a peaceful rebellion against a violent world, and embodies the ideal of practicing harmlessness towards animals; human and nonhuman.
* Live Vegan, and know that there are many benefits for humans and the planet if we adopt the vegan ethic, but there is one authentic reason to be vegan: to live without exploiting animals.

Historically, when faced with evidence that differed from the widely-held beliefs of the time, humankind has experienced a mass change of perception.


Veganism is humanity’s next evolutionary step.