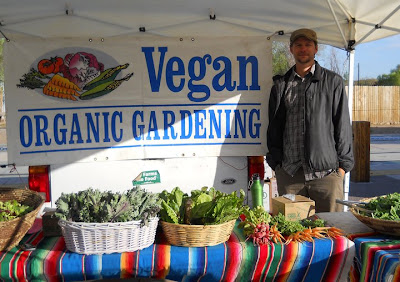 From questioning farmers at the local farmer's market and elsewhere, I've learned that many organic (and even non-organic) gardeners use blood and bone fertilizer on a regular basis. I question what to purchase with our dollars: food grown with chemicals that damage the soil’s fertility and our own health or food grown in blood and bone; the by-product of an industry that harms animals. I accompanied a local organic certifier on an inspection, which made buying organic food less desirable because of my strong stance on veganism. I needed a solution to this problem. I never thought I would get my hands in the dirt with the worms, but I decided to help grow the food (vegan-organic) for Shangri-La, Gentle World’s Vegan Paradigm Center on the north island of New Zealand.

The ‘Veganic’ gardening system avoids chemicals, as well as livestock manures and animal remains from slaughterhouses. Fertility of the soil is maintained with vegetable compost, crop rotation, mulching, planting nitrogen-fixing cover crops, and other methods. Soil conditioners/fertilizers that are vegan include: -

Lime provides calcium and magnesium for your soil. Calcium is essential for strong plant growth and aids in the intake of other nutrients. Most plants prefer a fairly neutral soil pH for optimum growth. Lime can be used to raise the pH level or 'sweeten the soil', if necessary. Your soil can be tested to see if you need to raise the pH level. Lime is used by some for breaking up heavy clay soil. Reducing the acidity of the soil is the primary purpose for using lime in the garden.

Gypsum (hydrated calcium sulfate) Gypsum is used where more calcium is needed without raising the pH. -

Dolomite – a finely ground rock dust and preferred source of calcium and magnesium.

Rock Phosphate is used for its phosphorus content. Phosphorus is an essential element for plant and animal nutrition. It is mined as phosphate rock, which is formed in oceans as calcium phosphate. The primary mineral in phosphate rock is apatite.

Rock Dusts (or Stonemeal) are slowly released into the soil and are used in an effort to re-mineralize soil that has become depleted through industrial and agricultural practices. Rock dusts can be applied directly to the soil, in combination with other fertilizers, or added to the compost. These products have a highly stimulating effect on microbial activity. - Rock dusts are considered ‘vegan’, but the mining of them can be detrimental to the region where they are mined from. Use them sparingly.

Rock Potash or potassium or wood ash – Potassium is an essential plant nutrient that enhances flower and fruit production and helps ‘harden up’ foliage to make it less susceptible to disease.  Rock potash is very slow-acting. The potash is released very gradually as the mineral weathers. This can take years. Use it when preparing the soil before planting.

Hay Mulches – Using a thick layer of hay to cover the earth will suppress weeds, as well as feeding the soil with organic matter as it breaks down. It will also encourage more worms to live in your soil. Put gardens to sleep over the winter and cover them with a very thick layer of hay mulch.

Composted Organic Matter – fruit and vegetable rinds, leaves, and grass clippings. A compost pile consists of food waste, i.e. peels from the kitchen, covered by course material like leaves, hay, or grass clippings. The object is to create layers of food material alternating with covering material to allow aeration. When a bin is full, the pile is flipped and covered by black plastic or weed mat to protect it from rainfall and create heat. It can be flipped again after a period of time, so the bottom becomes the top. Cover again and within a couple of months, depending on your climate, nature's master recycling plan will have taken its course and you will have vitamin rich soil.

Green Manures or Nitrogen-fixing crops – 'Green Manure' is a cover crop of plants tilled into the soil. Fast-growing plants, such as wheat, oats, rye, vetch, or clover, can be grown as cover crops between garden crops and then tilled into the garden as it is prepared for the next planting. Green manure crops absorb and use nutrients from the soil that might otherwise be lost through leaching, then return these nutrients to the soil when they are tilled under. The root system of cover crops improves the soil structure and helps prevent erosion. Nitrogen-fixing crops such as vetch, peas and broad beans (fava beans), and crimson clover add some nitrogen to the soil as they are turned under and decompose. Cover crops also help reduce weed growth during the fall and winter months.

Liquid Feeds such as Comfrey or Nettles act as an organic liquid compost.

Seaweed (fresh, liquid or meal) is used for trace elements. Seaweed is best used harvested fresh from the sea as opposed to washed up and sitting on beaches. Some veganic gardeners use bulk spirulina or kelp meal (used for potash and trace minerals).

Neem – The Neem tree is known as the wonder tree in India. Neem has been in use for centuries in Indian agriculture as the best natural pesticide and organic fertilizer with pest repellent properties and insect sterilization properties.

Green Sand – used as a soil amendment and fertilizer and is mined from deposits of minerals that were originally part of the ocean floor. It is a natural source of potash, along with iron, magnesium, silica and as many as 30 other trace minerals. It may also be used to loosen heavy, clay soils. It has the consistency of sand but 10 times the moisture absorption.

'The No Till method', which ironically rhymes with 'NO KILL method' is a practice that does not till the earth and kill worms in the soil. It is more gentle, from a vegan standpoint, and worm castings are an excellent fertilizer for the soil.

Epsom Salts are an excellent source of magnesium.

Returning to Hawaii from New Zealand, I went to a natural food store and found tomatoes with a sticker saying 'Vegan Tomatoes' grown organically with neem oil and vegan fertilizer. There must be others who feel similarly and are requesting growers to elevate their standards. Organic certifiers should not allow the use of blood and bone anymore because of the United Kingdom’s problems with Mad Cow and Hoof and Mouth diseases, aside from these products being unethically sourced. By growing our food veganically, there is a greater hope of eliminating transmittable diseases and bacteria. Growing ‘veganic’ is a healthier and more ethical alternative to chemical or even organic agriculture. I never imagined what a fulfilling experience it would be to work hand in hand with nature and witness this miracle of life; that of growing your own food, vegan-organically.