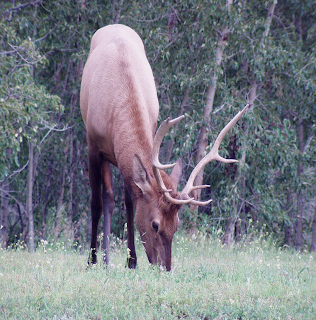 I came to the forest as a haven from man’s world, to find the peace that inhabits the woods, the meadows and hills. I lived in quiet solitude with the trees, my elders, who exemplified longevity and growing upward. I lived here harmoniously with the deer, the squirrels and chipmunks. With them, I shared my fruit and vegetable cuttings, and my Love. It was a magical reality.

A young buck, I called Bambi, seemed nearly fearless. He decided to stay around camp for the scrumptious fruit and veggie rinds and the sincere feelings of elation that we displayed because of his presence. He showed up like clockwork at our tent first thing in the morning. He ventured very close to me, literally a foot away. Like a dog, he came when I called, and followed where I led him. (Probably in the hope that I was leading him to the compost bucket!) He usually came with the same clan consisting of two doe of different sizes and a fawn. The fawn often nuzzled Bambi, following him, and crying out for him in soft and sweet little cries. Bambi took care of the fawn like a big brother. (I later noticed some little bumps protruding above the brow of the fawn; it was a baby buck!)

We visited the same national forest, annually. This year in particular, the bucks stayed with us at the campsite. There was a four-pointed “Little Buck” who always stayed with “Big Buck”, a very handsome six pointer. “Little Buck” was the most shy of humans. Then a horrible madness darkened this magical reality of befriending the forest deer. (Yes, these were wild deer whose other experiences with humans were that of being stalked and preyed upon.) Bow and arrow buck hunting season had begun.

Men with weapons, who were perfectly within their legal rights, (the laws of man; not the laws of Truth or Love) came stalking these gentle beings that would not even think of hurting them! Our camp was a refuge from the shocking cruelty that people, who physically resemble me, inflict on deer. I was never so upset about being part of the human race. I wondered how humans who look so similar could perceive things so differently? How could they even think about killing, especially when all around them, trees were transforming to a radiant golden color. (Any sane parent would be taking their child to witness this miracle of life!) But I saw parents bring their children to the forest to instill in their child the heartless act of taking someone's life.

I came home from a walk one day to find one such hunter invading the privacy of my tent area. This man, another man, and an eight-year-old boy were responsible for shooting Little Buck. The hunter claimed to kill him, though he was never found, even after hours of searching. That day was a living nightmare. Sorrow grabbed a hold of our hearts. The women cried and screamed in disbelief. I fell to the ground saddened by life’s unfairness. The hunters threatened to kill another buck when they returned in three hours, if they didn’t find the one they had already shot.

Later when they returned, they drove up and saw me with Bambi, not a foot away. I screamed to scare Bambi away from them. He listened to me, as always, (though it took a couple of screams). Miraculously, the hunters were impressed by how tame the four-pointed buck was, and said that they had no interest in killing him. This made me think: if hunters only knew how close we could be, how much like us they are, and that they have families and relationships, perhaps, then, they would not kill the deer.

Days later, Big Buck returned with Bambi. He was wounded in the groin area, with a sizable patch of dried blood on his leg and a limp that showed especially when he ran. He was more skittish of me than before, but trusted that he could find a shelter of Love from the frightening world of humans. He and Bambi were standing side by side and looking at me curiously. Big Buck became “Prince Charming” at once. (We realized that Big Buck is not a great code name with human hunters prowling the woods!) The next morning, a seven-pointed buck, whom was obviously protecting Prince Charming because he was wounded, gallantly escorted him. He stayed by his side and brought him to the front door of my tent at dawn. What magnificence to behold! He left once he had brought the wounded buck to me along with a dozen doe and fawns, and Bambi.

All I could think of was healing ‘Prince Charming’ with my love, a song, and extra special organic peels! Eventually, the seven-pointer became a regular guest at camp, too. We gave him the name Sir Galahad. Each day, as a group, we guarded and protected the bucks, reported to each other as to their whereabouts, spoke to the hunters when necessary, and most importantly, raised our consciousness in the hopes of saving them. A cold snap hit the woods and Prince Charming had not been seen. I worried that this would be detrimental to his healing. And then, an Indian summer warmth spread through the woods and Prince Charming showed up regularly, and appeared to be healing.

Bambi continued to peep his face in the tent windows in the morning, and what a joy for us all when the two big bucks would come running up daily for meals. For their safety, we would feed them slowly, trying to keep them with us until dusk. It is a triumphant feeling for my soul that even after being wounded by a hunter and perhaps losing Little Buck, that Prince Charming could still sense the difference between those who would hurt him and us, and continue to appear at our campsite. And though we look like the same species as others they've encountered, Bambi, Prince Charming, Sir Galahad, all the adorable curious fawns and the doe who bravely eat from our hands, can all testify that we are not the same species. They have studied us much, by looking on curiously. They have even figured out that our vegan dog friend whom basks in the sun paying them no attention, is, in fact, not a coyote (though I had just seen one that resembled our dog in size and look). The deer felt our veganism!

It is a privilege to be judged by these animals as worthy of their trust. I have realized from many loving experiences with other species, that when we stop eating them (and their bodily fluids), and stop wearing their skins, or participating in their exploitation in any way, our reward is their friendship! From my point of view, the animal's friendship is, by far, the greatest of the many rewards of vegan living. It is one of the purest and sweetest feelings we humans can know.

I enjoyed reading this. Thanks for posting.

This was a wonderful experience for you - thanks for sharing it. You must have had some extreme emotions; besides the joy of feeling their trust and friendship, I’m sure you felt terribly anxious and concerned knowing how much you wanted to protect them, but not wanting to make them TOO trustful of humans since there are those out there who mean to do them harm.

This was the dumbest thing I've ever read. I don't see vegans protesting the natural predators of these animals.

What an amazing experience, thanks for sharing. Great Story!