MYSTICAL TRANSFORMATION; A True Tale of a Butterfly 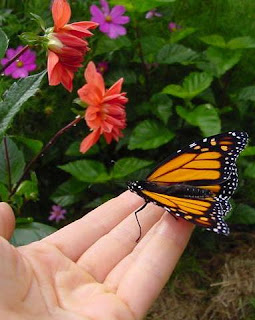 Living in New Zealand, in a place of splendor, I was saddened to come home to find Monarch butterflies suffering from being stung by wasps. I picked up one such butterfly and brought him inside. He hung motionless. His wings were shriveled and damaged. It was 14 hours of this motionless behavior, so I thought he had died.


When he was stung, he was still in the defenseless 'drip-drying’ stage, where their wings straighten out from their 10-14 day stay in the chrysalis. He had just emerged from the chrysalis, but didn’t yet know what it was like to be a butterfly and fly the sky. Then high and behold, he gracefully fluttered his wings, twice. I could easily identify him as a male because of his black spots on the vein of each hind wing.


It was raining so he was inside. When the rain stopped, he’d go out for some fresh air and flower-hopping. He’d step up onto my finger like a trained pet. He was handicapped and I was his wheelchair. The next day I left him out, but then I felt anxious leaving him unattended, vulnerable to wasps. I hurried home and found him at the beginning of the grassy path to my door. I put my finger out in front of him, and he stepped on. We went Zinnia hopping and he had the time of his life; from pink, to yellow, to orange; which was his favorite. They were color coordinated. I felt truly honored to share these moments in the life of a butterfly. Using this feeler that uncurled from his forehead and with impeccable aim, he would find the nectar. He was enamored with the orange Zinnia, but I escorted him over to a yellow Zinnia in its perfected state. I took him over to several other flowers and he, immediately, stepped back on to my finger. It seems he was not enthralled with them. (Apparently, the Monarchs use vision to find flowers, but once they land on a flower they use taste receptors on their feet to find nectar.) I had become a butterfly babysitter, putting him to sleep into his motionless, upright position. It amazed me; this immediate trust between a butterfly and a human.


On day 4, two friends came to tend to him. He had the pleasure of meeting two more vegan women; both very gentle like him. One of them named him 'Transformation'. On this day, he was more serious about drinking the elixir of life; flower nectar. Later, we went for a practice flying session. His wings were still quite curled up. Inside, he went into his upright, sleep position. I would sit and think while looking at him. Every once in awhile, he would extend his wings. I'd recall what I was thinking when he did this and interpreted it as a mystical message, thus came his name, Mystical.


It was now day 5 of befriending a butterfly. I was leaving for a week and he was a full-time job. What to do with him became of great concern. He was at his best today because the sun had finally shone upon his wings. I would lift him to the blue sky and inspire him to fly by singing this little tune: 'What could be more fun than flying in the sun?' He'd start flapping his wings. When he landed in the grass, I'd put my finger in front of him and his fragile, weightless, black legs stepped up on to my finger. He tried again. This time he flew over to the flower garden. On his very own, he flew from Zinnia to Zinnia! I was standing guard, shooing away wasps. They were our happiest moments together. He flew and landed right next to a bumblebee on a flower. The bee paid no attention to him. Various flying beings were competing for the flower nectar.


I introduced him to the guests who had arrived today as 'Mystical Transformation'; a combination of the two names given to him. A young couple watched him while I left. They seemed to have a mutual affection for each other. When I returned, I discovered that he had flown away, (while they were tending to another butterfly that was fatally stung by a wasp). My initial feeling was sadness because I didn’t believe he could survive on his own. I looked around for him. Two guests, who had witnessed his flying away with a breeze, showed me his path of flight. We searched the forest floor to no avail. Then we looked up, right where he supposedly flew. Out of our reach, was a butterfly resting on a softly swaying tree branch against a clear blue sky. This butterfly wasn't the usual fluttery butterfly, which made us think it was my special friend.

He was the picture of contentment. His wings were straight, though. Could it possibly have been Mystical Transformation? Could his wings have straightened out? Did he live up to his name? Was it a sad or wonderful ending? I don’t know for sure, but I hoped that a creature with the incredible power to transform himself from a crawling caterpillar to a flying being, also had the power to heal the wings he so magically created.What I do know for sure is that for five days I was in love with a butterfly, and so, hold the mysticism of his being in mine.
The habitats of Monarch butterflies are becoming threatened in both hemispheres. We can plant Milkweed, the family of plants that they live on. When the butterfly first emerges, leave it attached to the plant from which it hangs and somehow make sure it is safe from wasps at this stage.
Plant the Milkweed amongst bushy plants such as Dahlias or Zinnias, where the caterpillars can hide and form their chrysalis.


Our reward for this little extra effort is not only a feeling of satisfaction for helping to sustain an effective pollinator of such natural beauty, but the butterfly's first flight will be taken from your hand!