My vegan hero is Leslie Cross; an early pioneer of the vegan movement and the man who is responsible for bringing about a literal definition of veganism that equated it with animal rights. Although the first Vegan Society was formed by Donald Watson and 5 members in 1944, it was not until 1949 that Leslie J. Cross pointed out that the society lacked an official definition. He then suggested: “the principle of the emancipation of animals from exploitation by man”. This was later clarified to “seek an end to the use of animals by man for food, commodities, work, hunting, vivisection, and by all other uses involving exploitation of animal life by man”. The definition was again changed in 1979.

In spring of 1951, Leslie Cross wrote an essay in the early vegan publication which concluded with the following quote: “A great and historic wrong, whose effect upon the course of evolution must have been stupendous, would be righted. The idea that his fellow creatures might be used by man for self-interested purposes would be so alien to human thought as to be almost unthinkable. In this light, veganism is not so much welfare as liberation, for the creatures and for the mind and heart of man; not so much an effort to make the present relationship bearable, as an uncompromising recognition that because it is in the main one of master and slave, it has to be abolished before something better and finer can be built. ~~ Veganism is in truth an affirmation that where love is, exploitation vanishes. It possesses historical continuity with the movement that set free the human slaves. Were it put into effect, every basic wrong done to animals by man would automatically disappear. At its heart is the healing power of compassion, the highest expression of love of which man is capable. For it is a giving without hope of a getting. And yet, because he would free himself from many of the demands made by his own lower nature, the benefit to man himself would be incalculable.” 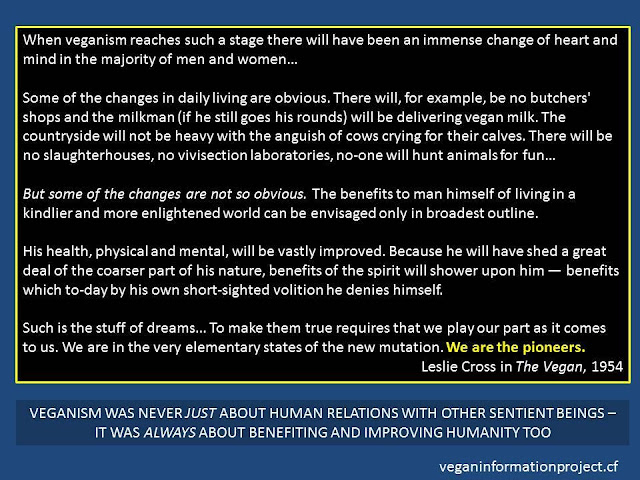 I saw a SILK commercial on television last night and thought of Leslie Cross and how happy he would be to see this mainstream advertisement of a plant-milk, as well as all the many vegan milks on the market today. In June of 1956, Leslie Cross founded the Plantmilk Society, which in 1972 became Plamil Foods, in the United Kingdom. He became a vegan in 1942, and at that time argued that dairy-milk production was cruel and exploitative. The first plant milk was fortified with calcium, vitamins B2, B12 and D2. In 1965 Plantmilk Ltd had Cross as its first full-time employee. 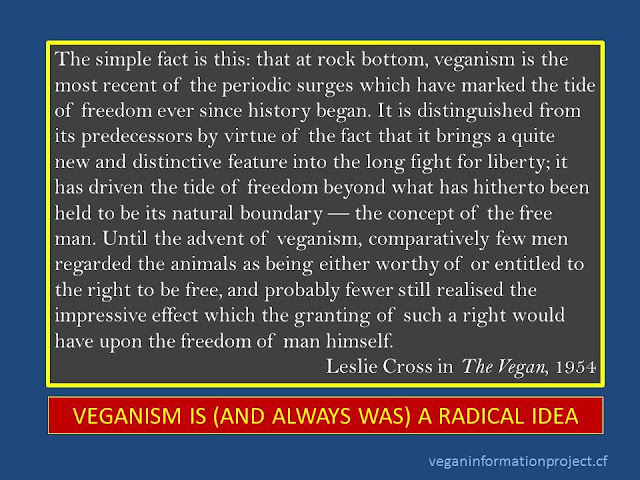 An obituary by early vegan pioneer; Kathleen Jannaway appeared in the spring 1980 issue that read:

“Leslie Cross, vegan for 35 years, founder member of the Vegan Society, and of the Plantmilk Society, died peacefully in his sleep on 2nd December, 1979. Inspired by his deep love of all life he looked forward to the day when plant milks would be generally used and a great burden thus lifted from the gentle cow. He was managing director of Plantmilk Ltd when it was at Langley, Bucks, was Secretary of the Plantmilk Society until his death, and often used his skill as a journalist to write on behalf of animals. We offer our sympathy to his wife, Constance, who worked so hard with him to forward the cause of animal compassion, and to his son and daughter, who were fine examples of vegan children.” 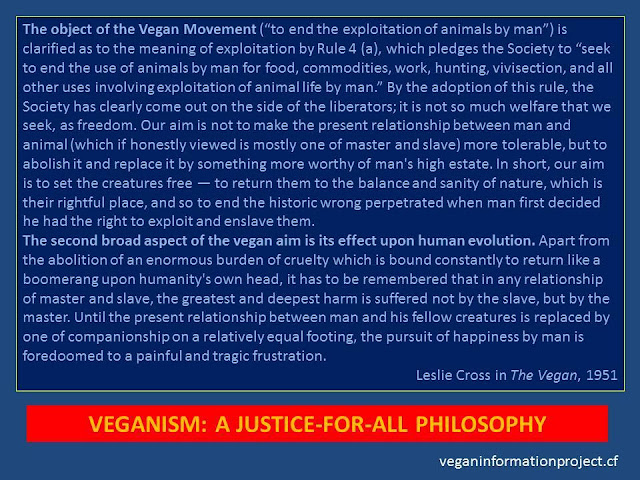 Thank-you Vegan Information Project (Ireland) for the posters with his quotes.
Posted by M. (known as) "Butterflies" Katz at 8/15/2017

Email ThisBlogThis!Share to TwitterShare to FacebookShare to Pinterest
Labels: My Vegan Hero

This is a wonderful article, especially special to me as Leslie Cross was my grandfather.

Thanks for leaving a comment! Very cool. Are you a vegan?

He was a lovely man but sadly he died when I was very young, no I am not a vegan but I am very proud of him and what he stood for.

Im a vegan, and I would like to know if you have a picture of your Grandfather and if you would share it with us?