The ONLY thing I am certain of in this life…

Excerpt from the book: Why I will ALWAYS be vegan; Over 100 essays from around the world 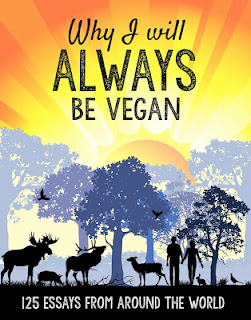 The ONLY thing I am certain of in this life…


They say that the only things of certainty in this life are death and taxes. My imagination begs to disagree. The philosopher in me has debated death – the form of death; the beyond of death; the fear of death – from every angle. There is little about death that seems certain to my mind. Taxes? Sure, I pay mine – but for all I know, I’m simply being duped over and over again with each fiscal year that ushers me closer toward the mystery of death. Nothing about death, nor taxes, seems “certain” to me.

Veganism. Therein lies my only certainty in life. I am CERTAIN that animals are sentient beings who can suffer and have a will to live. They feel; they think; they breathe. I am CERTAIN that harming them in ANY way is a hideous crime – whether or not 'the state' would find me guilty on such charges. I am certain that the furs and skins of my animal brothers and sisters look far more beautiful on them than they ever could on me! I am certain that I could not use cosmetics and detergents that have maimed innumerable innocents through animal testing. I am certain that terms like “circus” and “zoo” are mere euphemisms for animal slavery, disguised by semantics. I am certain that there is no logic that could defend my choice to identify the life of my “pet animal” as priceless, and simultaneously allow me to attach a price tag to the life of a “food animal”. The moral code by which I live must be one of consistency. These are the simple consistencies and certainties that veganism adds to my consciousness. I am awakened in veganism. Veganism has ripped the proverbial wool from my eyes. I trust the principles of veganism as it offers the simplest, most comprehensible foundation of morality: In every situation, always do the least amount of harm possible.

I am certain that I want NO hand in the destruction of the earth, nor to carry guilt upon my shoulders when future generations turn to us and ask us WHY we didn't change our ways when there was still hope. I am certain that I am a minute speck in the cosmos. I do not wear a badge of self-importance that allows me to declare myself hierarchically superior to the other beings alongside whom I wander this globe. In this acknowledgement, I thereby declare that I am by no means entitled to pillage the earth, nor commodify or enslave earth's inhabitants. Instead, my responsibility is to honour, protect and respect all that I am privileged to be a humble part of in this lifetime.

Email ThisBlogThis!Share to TwitterShare to FacebookShare to Pinterest
Labels: Why I will ALWAYS be vegan essays