Breeding Anyone but Yourself is Clearly Wrong

The last thing our Earth needs is more inhabitants; specifically humans. The second to last thing planet Earth needs is billions of farmed animals that humans breed into existence; who individually are wonderful beings, but collectively happen to be significant contributors of greenhouse gas emissions leading to global warming and Earth's demise. The planet we all share, does not need any more humans and the beyond comprehension number of farmed animals they bring into existence. Above and beyond that, it is unethical to breed someone else. It's a violation of basic rights. No one has the right to breed anyone other than their own self; I know this from the height and the depths of my soul. Some call it rape. 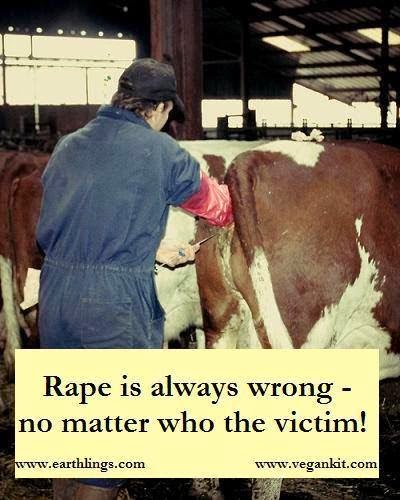 Common practices of the meat and dairy industry include collecting semen from bulls and forcefully impregnating cows. This is sexual assault. Cows bred to be used for dairy production have pregnancy forced on them, relentlessly and several times over. Usually men perform the perverted procedure of sticking their arm up a cow's rectum (all the way up to the human's elbow) to feel for proper placement to impregnate. Sadly, even women are performing this common practice on sisters of another species. Looking at the "how to impregnate a cow" photos online, it looks like it would be painful for the cow.

Cows carry calves full term and go through the trauma of childbirth. And then these mothers known for displaying a very strong maternal bond with their newborn - have their calf kidnapped. These exploited bovine beings are bred with the intention of taking their baby from them, usually within a day or two of birth, and either killed or made miserable and then killed and sold as “veal”.
It's sad that humans socially accept the systematic enslavement of cows to intentionally breed them into an existence of misery; with the intention to remove calves from distraught and bellowing mothers. The dairy industry is based on stealing milk for humans that was meant by nature for calves. Dairy farming relies heavily on breeding and exploiting the reproductive system of sentient animals.

Breeding dogs for profit (or even not for profit) is misguided on so many levels. Around 4 million cats and dogs are killed every year in U.S shelters alone. Every day, day after day, human's-best-friends have their lives ended before it was even lived. It's not reasonable to allow dog breeding when there are so many already here; in concrete, loveless shelters unjustly on death row. Their crime? They were not people's dream breed of dog. Any being has the birthright to select who they breed with, without human intervention. 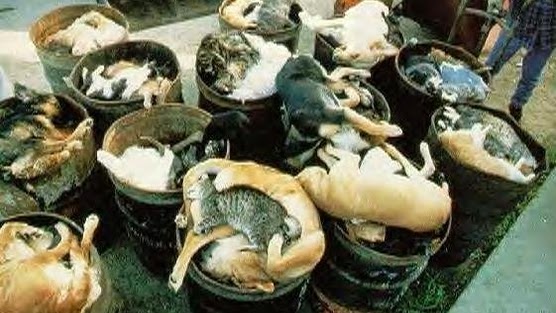 Dog breeders lock a female dog in the height of heat in a small room with a dog being used as a "stud". Our choice of only wanting a certain breed frankly should not take precedence over the already-living dogs on death row, needing a home. Breeding a litter of puppies makes the breeder culpable in the death of countless shelter dogs who then become less, or not, adoptable. And anyone demanding the breeder to breed dogs by purchasing a dog that was bred as opposed to rescuing from a shelter or a situation - is an accomplice to this crime. Any society built upon reason would outlaw breeding dogs. This includes the horrific puppy mills selling to pet shops that even cities are outlawing, but also home breeders, and those who breed dogs for hunting, for working on farms, as scent dogs, etc. Finally, inbreeding certain breeds so people can have their designer dogs oftentimes puts these dogs at risk of birth defects and genetically inherited health problems.

The majority of animals in laboratories were purpose-bred specifically to be used in experiments and then killed. These exploited victims are "manufactured" to be research tools by those who disrespect 'other-than-human animal life'. People who sell purpose-bred animals are known by the U.S. Department of Agriculture as 'class A dealers'. Worldwide it is estimated that the number of vertebrate animals ranges from the tens of millions to more than 100 million animals used annually. Purpose-bred birds, rats, mice, fish and other cold-blooded animals are the majority of species exploited for research. Over one million dogs, cats, non-human primates, guinea pigs, hamsters, rabbits, and farmed animals are experimented on in just U.S. laboratories, every year. 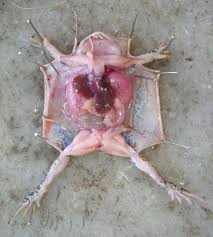 When they told me I had to dissect a frog in high school (4 decades ago) - I refused. If enough people refused to accept animal experimentation, trillions of animals would not be bred into existence and alternatives to animal testing would replace the prevailing model. By not purchasing products that were tested on animals or supporting businesses involved with animal testing - we can stop demanding vivisection or animal research be carried out on our behalf. There are non-animal forms of experimentation emerging - that don't include barbaric behavior towards animals. Therefore in vitro studies should be recognized and supported as a great achievement that can take humanity out of the dark ages of cruel indifference to other animals. Other species of animal are obviously enough like us in feelings that these researchers and scientists think we can extrapolate findings from them to humans. That is reason enough to protest animal experimentation.

I make a point not to even cite any information that was learned from animal experimentation. I don't want to credit this type of research. A popular film about the health benefits of of plant-based diet cites a (now vegan) doctor's past research that he gained from experimenting on animals. This film is recommended as a vegan video. I can't see it that way, since there's more to being vegan than eating a plant-powered diet.

If you pay the hit-man, you'd be convicted of murder, by law. Many people think of the word "murder" only pertaining to human beings, but humans need to open their eyes to the sad fact that they are mass murderers of other members of the animal kingdom. Breeding - then exploiting - then murdering.

Don't buy animals from breeders. (Don't buy animals; just as you would not buy a human being.) When we stop buying; they'll stop breeding. We animals of all species have the intrinsic right not to be bred by someone else. When Mark Twain describes the human race as 'the lowest animal', he had a point. No other animal engages in the repulsive ritual of exploiting the reproductive system of helpless animals. Because people have given themselves a legal right to own another animal, they can do whatever they want with "their possession". 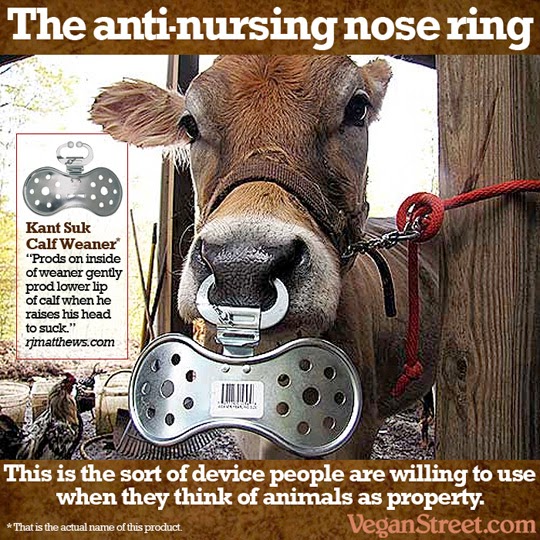 If we take a step back from our societal conditioning, we can clearly see that forcing pregnancy and childbirth on someone for personal profit must no longer be considered socially acceptable or legal. Overpopulation and diminishing natural resources are occurring simultaneously. I believe we need to pause and question our breeding habits. But one really bad habit holding back the human race - is humans breeding other animals. When we live vegan and remove our guilt from participating in this injustice, it becomes perfectly clear that breeding anyone but yourself is wrong.
Posted by M. (known as) "Butterflies" Katz at 5/16/2014

Email ThisBlogThis!Share to TwitterShare to FacebookShare to Pinterest
Labels: Breeding animals is wrong

Some of those photos truly make me cry and start to HATE this world… WHY?!?!?! I am sure living on the wrong planet all together.

There are parts of animals used in computers, phones, and a lot more everyday items you use.. So Find a new Hobby. Or stop enjoying anything with rubber wheels,getting your nails done, using deodorant, fabric softner, plywood (for building houses), fireworks, condoms, and I could keep going. So get over it!

To the last anonymous comment: Just because we can't fully eliminate our complicity in harming other animals, does not mean we should not try as far as reasonably possibly to do so.

I don't use many of those products you mentioned. There are vegan alternatives.

There needs to be more people posting stuff like this.living in a chaotic world this stuff is put on the back burner never thinking about it....its obviously not going to be in the news or paper everyday but it should be it should bevthrown in our face so it sinks in how horrible this is.I eat meat rarely
but the more I learn the more I want it put out of my diet all together! Thank you for sharing I new about there final destanation and the slaughter houses but not about this! Us humans just have to keep pushing shit to see how far they can go and to think about any other stuff they do thats being done with nobodys knowledge just creeps me out! The natural cycle of life needs to be apart of who we once were to the shit we do now its disgusting I believe we all have a spritual connection and by them doing this takes a toll on us spiritually with outvevrn knowing it God did not create these animals for this reason im talking about the whole new level there on it goes way beyond justca sorce of food...what they are doing is an abonation n needs to be stopped

To the last anonymous commenter: thanks for the sentiment, but it's not they - it's you. If you are not vegan, you are literally demanding other animals to be violently assaulted. It's very simple. You must change you. And everyone that stands up and changes to the vegan way of life is one step closer to the vegan humanity we are longing to create.

God created animals before He created us for us to take care of them. not violate them or abuse them. You are eating tortured flesh with tortured cells, which is causing auto-immune diseases to rise in humans. Our cells are turning against eachother from the horrific suffering we subject these noble, gentle besings. #DoItForTheAnimals #VeganIsBetter 🌰🌱