Vegan since conception, ‘Soul’ (yes, that’s his beautiful name!) is now 3 ½ years of age. He was never a small baby – just perfect! His cute little physique is something to behold. He’s athletic and loves to run. He’s only 3.5, yet I often find him an interesting conversationalist. He’s quite refreshing, since he doesn’t posses an ounce of racism, sexism or speciesism. Nor is he ageist. He looks at one’s soul, not their age, sex or skin color. He loves all animal. He speaks to other animals like they are humans (humans; in a furry suit).

He has never had a drippy nose. His skin is smooth and clear. Soul never gets hit; as his parents use a gentle approach to teaching and punishing without physical violence. It would be a wonderful world if everyone was lucky enough to be raised like Soul. I thought I would share with everyone the things that have made him the super healthy vegan kid that he is:

1) Soul drank mommy’s milk for over two years, never the milk meant for a baby calf of another species; sustenance that is meant to turn a calf into a thousand pound cow in less than a year. He drank the milk naturally meant for a human baby.

2) Soul (and also his mommy - through pregnancy) have supplemented with vegan DHA and Vitamin B12. (They used Dr. Fuhrman’s liquid B12 and algae-derived DHA; a long-chain fatty acid). This was advised by a vegan medical doctor and a vegan pediatrician; both friends.

3) Soul has been taught to love animals from an early age. He understands why he is vegan and it makes sense to him. He is not tempted to eat non-vegan “food”, while sharing meals with his friends at play center. They want to try his avocado on rice crackers (when we explain why we are vegan and that are food is yummy), but he has no desire to try the “cheese and crackers” of his playmates.

4) Soul gets plenty of exercise and walks in nature. He spends a lot of time in the natural world discovering rivers and lakes, caterpillars turning into butterflies, and playing under the shelter of a tree.

5) Soul gets naked in the sun, but when it’s midday he wears his hat and is careful not to burn his tender young skin; an important time in life to be sure not to burn. He is gently conditioning his skin and surely won’t become deficient in Vitamin D; a very important nutrient (the sunshine vitamin) that many people are lacking, and vegans must get from sunshine exposure on skin - or supplement.

6) Soul gets conversed with like an adult (and like a kid too). He has a clever, reasoning mind. His memory is extraordinary. He works a computer. Living vegan has propelled him just fine through the levels of human growth and development.

7) He eats veganically-home-grown food and fruit fresh from trees. He has a very discerning taste-bud because he knows what fresh, real food tastes like. He only likes ripe fruit, especially sun-ripened where he can pick it directly from the branches. He loves picking blueberries from the bush.

8) Soul chooses to eat one food at a time.

9) This is what Soul eats: garden fresh steamed vegetables such as sweet-corn, courgette (zucchini), potatoes, buttercup squash, and string beans. He likes raw garden sweet peas and cherry tomatoes, raw carrot, and raw sauerkraut. He loves watermelon and other melons, banana, plums, pears, apples (no skin), and most fruits, but not dried fruit. He likes the crunch factor; so he enjoys nuts (raw cashews, macadamias, or roasted and salted organic peanuts), rice crackers, and toast. He often has avocado on (toasted) gluten-free wholegrain bread, or crackers, or on sheets of Nori. Pasta (gluten-free or spelt) might be his favorite, without sauce, just “the usual”…He tops all his grains and vegetables with a little (cold-pressed extra-virgin) olive oil, organic herb salt, and what he refers to as “sprinkle” (which is good-tasting, B12 fortified savory yeast). He tends to lean towards a high carbohydrate diet: grains, bread and fruit. He eats whole grains such as rice, quinoa, and buckwheat. He likes a small amount of organic juice and soy milk. He sometimes enjoys green drinks/smoothies, which is good because he has not yet learned to like salad or greens. But he likes broccoli stalks steamed! For some reason, cucumber was his favorite food for years. He had it for dessert every night. Now that he is a “big boy” (as he tells me), he still likes them, but not as much as when he was a toddler. He often changes his “taste-bud likes and dislikes”. He used to like tempeh and now he doesn’t. He likes soups; especially garden vegetable with butternut squash and small red lentils. He likes tofu chunks with the usual olive oil, yeast, and herb salt. He loves organic peanut butter and macadamia butter. He absolutely ‘goes bananas’ for chocolate (he only gets a small amount at a time after a meal). I corrupted him! I wanted him to know that he is not deprived of treats so when his friends eat candy, he will know that he can have it too while remaining vegan. The chocolate is fair-trade, vegan, and organic.

10) Perhaps this is “too much information”, but hey, it is part of his health tips! What goes in has to come out, and Soul's does, very regularly. After Soul makes a  perfectly-formed, prize-winning “poopy” in his own mini (composting) toilet, he bends over and sticks his bottom out for you to wash him up (he also has an aversion to toilet paper, for some reason). Somehow, I got stuck having to do this job, one day. Having made the choice NOT to have children, I was a bit nervous. It wasn't so bad though as he’s very clean. It was heartwarming how cute he was instructing me on how to wash him up with soap and water. That must be my queue to say: The End! 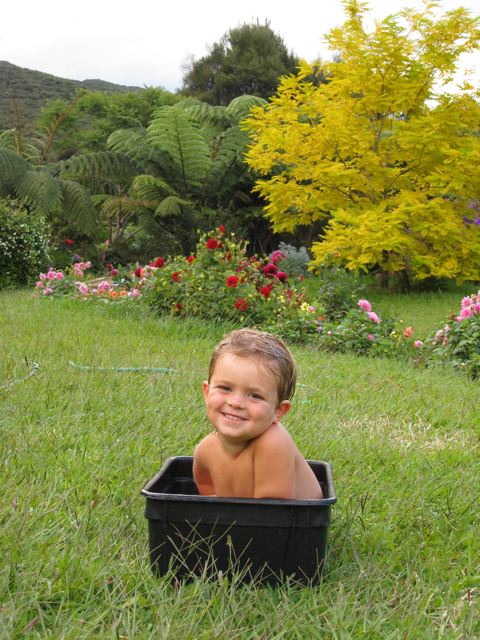 Delightful blog and photos! Soul is so blessed to be growing up in such a kind and respectful family. I hope that through reading this, many parents will overcome their groundless fears about raising a child vegan. Health and happiness shine out of this young boy!

It is remarkable blog. I wanted to learn such type of the things that I have got from here at one platform. Thanks.

Why be a vegan if you need to take artificial B12?

Responding to Joanna - B12 is lacking in soils...they even add B12 to the animals food that people eat. They animals are supplemented.

Why you ask? Well...to me it is much more preferable to take a supplement that was made in a sterile environment over a microbe found in dirt that animals eat and I have to torture and kill the animal to get it; that is more unnatural and not normal, if you ask me.