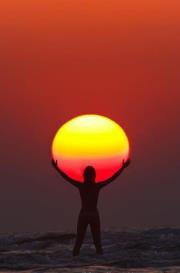 I made a stand to be vegan thirty-three years ago; a protest to the “the way it is”. Veganism defines civil disobedience. When becoming vegan, we make “a stand” to disobey the uncivilized behavior of humanity towards other animals. I made many “stands” along my vegan journey. When I say ‘making a stand’, I mean to adopt and then remain resolute in position or attitude.

In my early vegan years, I realized (with the help of friends) that beside not purchasing or consuming animal products, that I could not serve fish (or any animal product) in a restaurant (or work for any animal exploiting business.) I had to make a stand that I could not participate in animal exploitation in this way; beyond the products I consume. I didn’t want to sacrifice ‘living as a vegan’ for ‘making money’. (Yes I realize it is challenging to make money and not be involved in animal exploitation since our society is heavily built upon animal-slavery.)

Though not an original thought of mine, I made a stand to be vegansexual, and I have complied with that stand. I have zero urge or desire to be intimate with someone who doesn’t care about the oppression and murder of other animals. And if someone wants to roll around in the sack with me -wink- they have had their vegan epiphany.

I made a stand never to purchase chocolate that's not fair trade, vegan and organic. Once I learned of the human slavery of the Ivory Coast’s cheap cocoa beans - where approximately 40-50% of the cocoa beans are sourced from, I wanted to be sure that I was opposing both nonhuman animal slavery and human slavery. Hershey Bars (and the like) would not taste good to me knowing young boys in Africa were enslaved for the cocoa beans (and bovines were enslaved for the milk). Slavery doesn’t taste good to me.

I made a stand to no longer eat in non-vegan restaurants. After three decades of veganism, it is just too sickening to sit around with other animal-eating humans as they relish in corpses and the products of misery. I also don’t enjoy the vegan food being contaminated with animal products. It is not always possible to support vegan businesses. I do sometimes have to shop at grocery stores, but I don’t ever have to support a non-vegan restaurant…and so…I made a stand. It’s been easy to live up to. Recently, arrangements were made to say goodbye to my niece and family and meet at a non-vegan restaurant, without my knowing and I felt obligated, so I went. Her boyfriend’s child sat across from me and had her first, one and only, vegan rap…which she initiated…and which ended with a giant hug…so I guess it was meant to be that I went this ONE LAST TIME.

I made a stand never to be physically violent towards people, as well as other animals. I was beat-up twice by my dad, (which is not his usual nature; he lost it). I know what it feels like to be the victim of physical violence. Because of what I experienced, I would never see that as an option to do to someone else; human or nonhuman. Being a woman, I can’t defend myself from the strength of a man, physically, and so I can empathize with the oppression of other animals. I’m surprised more people don’t draw from their life experiences of racism, sexism, homophobia or physical abuse – and use them as sources of empathy for fellow sentient animals and the unjust speciesism they endure.

I made a stand to try to become a person that others would want to emulate – exemplary; those who know me would of course want to become vegan because of the super cool person that I am. Well, I failed miserably at this one!

The moral of the blog is we make a stand to become vegan, and then we grow with the vegan ideal through the years. I often hear those who don’t like what they perceive as “the most vegan contest” type of behavior, but dedicated vegans simply feel like they’re making a stand for all breathing, feeling fellow inhabitants of Earth.

Long time vegans - like me - have proven that living vegan can stand the test of time. Veganism stands to reason no matter from what angle you examine it. It’s a social justice movement that is standing up to the majority and saying the violence inflicted on sentient animals is unacceptable. Vegan pioneers are standing up to the lies perpetuated by propaganda, commercials, and society’s way where money-powered-exploitation trumps decent behavior. We can’t stand the utter nonsense that dribbles out of human mouths about how they have a right to harm animals. We’re vegan and we’re standing up for other animals. We’re standing our ground and refusing to compromise; unyielding in the face of the majority and following what we know to be Truth. We don’t want to stand alone. As a species, if we don’t adopt vegan living, we don’t stand a chance. The Time is Now - for making a stand.

Email ThisBlogThis!Share to TwitterShare to FacebookShare to Pinterest
Labels: Making a Stand

This is a really good essay. That last paragraph is so concise and truthful that I can see it becoming regularly quoted (I did)! Thanks, M.

Absolutely! We owe it to all enslaved mistreated animals of all species (including humans)to stand up for the vegan ethic and everything we believe in. We must be courageous and stand our ground in the face of ridicule and hostility from most of our own species. That's integrity.