Is Veganism a Choice?

Whether ‘to have’ or ‘not to have’ a baby is a choice. Dragging a newborn baby calf from his/her mother soon after birth so you can steal the calf’s life sustaining milk – is not a choice; it’s a crime – and most of humanity is complicit and then call their crimes “a choice”.


“The most important thing we as individuals can do is choose to have fewer children. While cutting back on your personal consumption of resources is laudable and may reduce your environmental footprint by 5%, 25%, or maybe even 50%, having a child will double your footprint, and having two children will triple your footprint. It is virtually impossible to compensate for reproducing by consuming less yourself.” source

Okay – you still want to bring a child here, that’s a choice…a questionable one to me, but a choice.

Is having sex with a 5 year old girl a choice or a crime? Is owning another person as a sex slave a choice or a crime? Not everything that people choose to do should be considered a choice, but sometimes something we should stop them from doing. Why do the majority of people choose oppression with their choice? Why do people choose to harm feeling animals when they don’t have to; what kind of choice is that? "Because they "taste good" should not supersede all sentient animal's interest to life, liberty and the pursuit of happiness.

While out to dinner, my nieces’ boyfriend’s daughter (who is twelve years of age) was asking me a bit about veganism when we chatted for the first time. She chose to sit across from me and she chose to question me. So I did my usual speaking on behalf of other animals and their plight. At one point, her father, at the other end of the table, looks to his child who is looking to him with questioning eyes regarding what I’m saying - and he replies “It’s a choice” (being vegan, that is). 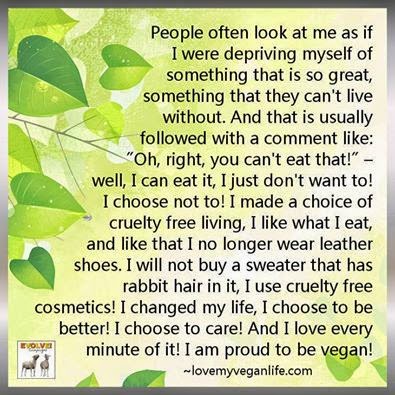 From my point of view, becoming vegan is not “a choice”, it’s an ethical imperative for humanity. It’s unjust to deny other animals their inherent birth-right to bodily freedom from human use. I, and many other long-time vegans, have proven that it is unnecessary to use fellow sentient animals for any reason. Just as no one should have the choice to kill you and barbeque your leg, or perform so-called scientific tests on you, or parade around in your skin, no one should have the option or “choice” to enslave or harm or kill other animals. 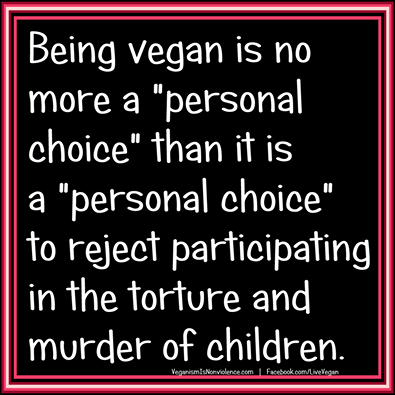 We always have a choice between doing what is right and doing what is wrong…all the time, in all our daily actions from practical to spiritual. If veganism is a choice, it is a choice to follow ‘what is right’ - and it comes with many personal and planetary rewards. Living, day in and day out, knowing that you are doing the right thing, uplifts one's life. So is being vegan, a choice? Well for me, harming others is not a choice. However, if you are still participating in unnecessarily harming other fellow sentient animals...then please choose to live vegan. Vegan living is THE ethical choice.

Email ThisBlogThis!Share to TwitterShare to FacebookShare to Pinterest
Labels: Is being vegan a choice?

Thanks Butterflies. I totally agree that veganism is not a choice.

Talking about veganism can be tricky sometimes, so I use the rule of thumb that if it wouldn't make sense to talk in a particular way about domestic violence (or any other form of violence), then it wouldn't make sense to use this language about veganism. For example, we don't talk about giving people the choice about committing domestic violence. So neither veganism nor abstaining from domestic violence are choices. The same goes for "weekday vegans", etc. Would we praise someone for being kind to their family on weekdays and then getting drunk and bashing them on weekends?? Would we congratulate them, saying "they are on a journey" or they're making "baby steps"?

Another pet dislike I have is describing veganism as a "lifestyle". You would never say "the lifestyle of not beating your spouse"! As for veganism being a "lifestyle choice" - no way!!

At the risk of nit picking(is that against vegan principles?)it is a choice.

It is simply a choice.