I Don’t Want to Model Products of Misery 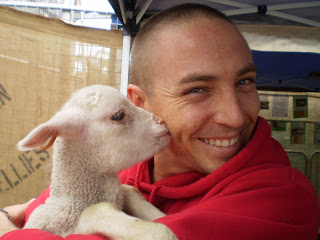 Some vegans write about new vegans still keeping/wearing/using their already-owned leather and wool items until they are worn out, if they can't afford to replace with vegan items all at once. They would never buy anything non-vegan, but still feel it is all right to wear and keep non-vegan items until they are no longer usable. I understand about not wanting to add to our society’s wasteful consumerism. I also recognize that money does not grow on trees. These are the justification some give for wanting to keep their wool sweater, for example, after deciding to become vegan. To me, wearing wool is somehow like an advertisement for the manufacturers of sheep products. Beyond purposely breeding in order to commodify the lives of conscious animals, they routinely perform painful mutilations on innocent sheep, such as mulesing - a surgical task that involves the removal of strips of skin from around the buttocks of a sheep, including lambs, without anesthesia. The docile sheep are restrained appallingly. I want to denounce the systems that commodify and harm animals - and don’t want to model their products.

Part of being vegan is about being exemplary. We want others to become vegan. We have to model what it looks like. When I had my “vegan realization”, I emptied my closet of all animal products. Friends of mine buried their leather and wool items. Wool sweaters and fur can be donated to wildlife rescue organizations.

Another option is to donate these wool, leather and other animal derived items to a needy, homeless person. When we habitually “buy new” and are participants in consumerism, we have to spend our days paying for ‘what we buy’. An ethical, ecological and economical way to live is to purchase recycled clothing, leaving money for new vegan shoes, if need be. Replace non-vegan items at garage sales, flea markets, consignment shops, and thrift stores when possible. I don’t want to live as a wasteful consumer, but I want to dress like a vegan.

I am sensitive to seeing the skin of my oppressed animal friends on accessories and shoes. What if someone was making shoes out of human skin? Would that be a turn-on to wear? No. I feel the same about wearing and seeing the skin of other animals. I can’t disconnect and pretend I don’t know where that leather product came from and the misery inflicted on gentle beings to get those leather shoes or other item. Leather is the most economically important byproduct of the slaughterhouse/factory farm/meat industry. The leather and animal farming industries are dependant upon each other.

Some might say that I’m a more resolute vegan than an environmentalist. They would be right. However, being vegan, I’m doing my part in helping to heal the planet from the environmental devastation caused by animal husbandry and the pollution caused by the toxins used in leather tanning. I am not a consumer, I am a water conservationist, I’m a tree-hugger; not a tree-killer, but I am a vegan, first and foremost because we are talking about fundamental rights of conscious, aware and feeling animals.

Proclaiming to be vegan and still wearing animal-derived items is confusing for people. We can no longer, in good conscience, advocate for animal rights while wearing their skin, and possibly not sending out the right message. There is so much hypocrisy and not enough clear vegan messages being put out there. I wouldn’t be caught alive wearing somebody else’s skin. We are fortunate to live in a time where purchasing vegan shoes, wallets, bags, clothing, toiletries, cosmetics, cleaners is all very easy. I became vegan when it was seriously difficult to source these products. I wore flip-flops to my first wedding. I want to look like a vegan, think like a vegan, act like a vegan, dress like a vegan, and feel like a vegan, by not modeling products of misery and injustice for all the world to see.
Posted by M. (known as) "Butterflies" Katz at 9/13/2011