'We Grew Large Brains from Eating Meat so it Must be Right'! WRONG. 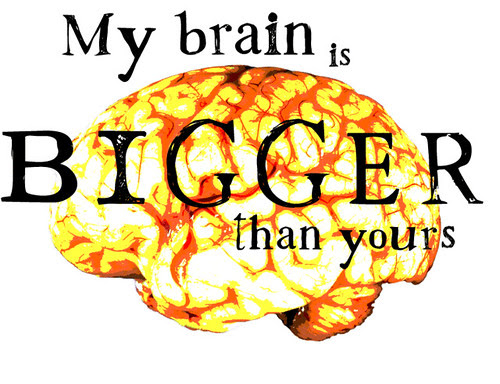 Some vegan educators have heard comments from non-vegans such as ‘We evolved and grew large brains, and are the most intelligent because we have been eating animal flesh, therefore it must be right.’

The first pertinent point is that glucose is the only fuel normally used by brain cells. This blood sugar is obtained from carbohydrates: the starches and sugars you eat in the form of grains and legumes, fruits and vegetables. These are the foods that feed the brain. “Meat” is not brain food, quite literally.

Animal “foods” are not good for the brain. The chief cause of Alzheimer's is ‘Amyloid Plaque’; a byproduct of animal protein, which blocks cerebral arteries preventing blood flow to the brain. Animal fat also lines the brain arteries. An online Alzheimer’s site verified, ‘the vegan diet, uncooked high fiber fruits and vegetables, can help the body eliminate the plaque and cholesterol.’

The blockage of an artery in the BRAIN by a clot is the most common cause of a stroke. Risk factors for narrowed blood vessels in the brain are just like those that cause narrowing blood vessels in the heart. High cholesterol is a risk factor in strokes, and other than what our bodies naturally and sufficiently make, is only found in animal “foods”. Excess cholesterol from eating animal products leads to a waxy accumulation that could block the blood flow to the heart or brain. So it seems that animal foods are not healthy for brains!


“Blood clots and poor circulation are caused by eating animal products. These are the real reasons for heart attacks, strokes, (the major killers of women in America) and Alzheimer's, poor circulation to the brain.” says super athlete Ruth Heidrich, PhD.

And this excerpt from an article in The Independent that actually gave both the pros and the cons of eating meat (I don’t think there really are any pro’s for eating meat): “Researchers University of California Los Angeles recently suggested that red meat could be linked to a build-up of iron in the brain, causing the opposite effect of antioxidants; in effect, the brain rusts. The researchers suggest it may also explain why more men develop Alzheimer's, as men eat more red meat than women.”

On another note, this from a BBC News story entitled 'Starch ‘fuel of human evolution’: Man's ability to digest starchy foods like the potato may explain our success on the planet’, genetic work suggests. Compared with primates, humans have many more copies of a gene essential for breaking down calorie-rich starches, Nature Genetics reports. And these extra calories may have been crucial for feeding the larger brains of humans, speculate the University of California Santa Cruz authors. Previously, experts had wondered if meat in the diet was the answer.”
http://news.bbc.co.uk/2/hi/6983330.stm

Let’s continue to disprove the ‘we developed big brains by eating meat - so it must be good for us’ theory. The relationship between brain size and intelligence isn't really about the actual weight of the brain; it's about the ratio of brain weight to the entire body weight. The largest and heaviest brain belongs to the Sperm Whale, weighing around 9 kilograms. However, humans do have the largest cerebral cortex of all mammals, relative to the size of their brains. Maybe we are getting smart enough to live without harming other animals: free-living, domesticated, enslaved…all of them!

Some say that carnivores developed bigger and better brains through our evolutionary process, because they had to figure out ways to catch their prey. Humans are now evolving beyond that predator-prey mentality to learn to co-exist with other species of animals and live off the (non-sentient) plant kingdom rather than being a predator, needlessly. Our evolutionary process has not stopped and humans are beginning to take our next evolutionary leap by becoming vegan.

Recent research has shown that the modern human brain has actually been shrinking over the last 28,000 years. This could possibly explain the lack of intelligence in our fouling our own nest and killing the planet we all share! (Just kidding; as there is only a minor link between brain size and intelligence.) Yes, humans are clever enough to create a computer chip, but they have not learned to live in harmony with their own and other species.

Having a large brain does not necessarily mean that humans use it to their full capacity. And most significantly, nor does being intelligent necessarily mean being righteous, or moral, or kind. Just because humans perceive themselves to benefit from harming others, that doesn’t make it right to do so. It is analogous to saying that ‘stealing’ or ‘raping’ is acceptable because you personally benefit from it.

Email ThisBlogThis!Share to TwitterShare to FacebookShare to Pinterest
Labels: Meat is not brain food