NO ONE CAN BE VEGAN FOR GLOBAL WARMING! 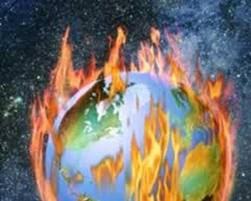 I have had the displeasure of seeing vegan campaigns with slogans like “Fight Climate Change – Go Vegan” or “Reduce Global Hunger – Go Vegan”. This is misleading.

Therefore, they are not the REASON one chooses to be vegan. No one is a vegan to combat global warming. One can abstain from animal agriculture and factory farming as a stand to halt global warming. This is Truth. However, veganism extends beyond diet to clothing and products and not funding practices of animal exploitation.

Eating a plant-based diet to the exclusion of all animal products IS healthier and would greatly benefit any human being that converts to this way of eating. It’s like no longer putting kerosene in your gas tank and finally putting the correct fuel in to run your system. However, eating plants does NOT make someone a vegan, but a strict vegetarian or an herbivore or plant-powered. Yes, if humanity adopted a plant-based diet and ceased breeding animals for human consumption that would free up a lot of grains to feed starving children and our ever-too-fastly growing human population. It's our best hope of halting climate change and slowing environmental devastation. It would benefit people – however eating the diet that vegan's eat is not the same as living the vegan ideal. It would be an excellent step forward in creating a ‘vegan humanity’ indeed, and probably everyone would then become vegans, if they became dietary vegans first. But the REASON one would go vegan, not pseudo vegan, is solely because they want no part in the social injustice of speciesism and our horrific disrespect of other animals. That is THE REASON.

We can mention the many benefits that come with vegan living in your advocacy, but we can’t truthfully have slogans that read FIGHT GLOBAL WARMING – GO VEGAN, which I have seen, or ask people to 'Go Vegan' because it is healthier for them. Slogans like these are misleading people from really understanding the vegan ethic and a disservice to animals and the advancement of the vegan movement. Alternatively, you can say:

Vegans, by not participating in animal agriculture, contribute the least to environmental degradation and the very serious threat of global warming. The vegan diet, which is one component of the vegan way of life, is nutritionally complete for all stages of the life cycle including pregnancy and athleticism, and even has medical benefits in reversing some diseases, and helps to protect us from many life-threatening ailments. There are many benefits that ensue from vegan living, but they are not the reason one becomes vegan.

This is from The Vegan Society’s site (the originators of the word and first vegan society):


“Today, the Society remains as determined as ever to promote vegan lifestyles - that is, ways of living that seek to exclude, as far as is possible and practical, all forms of exploitation of animals for food, clothing or any other purpose. With your help, veganism will soon be accepted and understood across the globe. Ultimately, the use of animal products (such as meat, dairy, eggs, leather and wool) will be viewed as an inhumane and unsustainable practice from a much less enlightened age.”

thank you! I say something similar every time I hear misleading statements about Veganism - it's good to see someone else doing it too lol ;)

This article is incredibly interesting and informative. Actually, I've noticed a string of articles lately that have been saying that going vegan/vegetarian may actually not be better for the environment like we thought. There is a lot of processing in many vegan and vegetarian products that would offset these environmentally friendly efforts. That said, here at Tasty Bite, we make preservative-free, all natural, ready-made, vegetarian meals. Because of what's been stated in your article, in our manufacturing, we use 60% recycled energy. We are aware of the impact that manufacturing and producing food can have on the environment, which is why we are constantly looking for ways to improve our efforts. You can check out our website: www.tastybite.com for more information. Great post!

please, dear friend, do some real, objectively research before you post your opinion
http://www.youtube.com/watch?v=es6U00LMmC4
just watch this video and think abouth it.
may peace and love for all life be with and in you.
Open your eyes, see the truth!!!

I can't disagree more.. I have no idea what's the point of this article.. Why is labeling so important? Why can't we agree that all ways for people to stop eating meat and dairy products are good as far as they REALLY HELP REDUCING ANIMALS' SUFFERING? It's true the meat industry affects environment badly and if caring for the environment is a good reason for somebody to become vegan what's wrong with it???
CAN'T I CALL MYSELF VEGAN AND BE ACTIVE IN VEGAN SOCIETIES ONLY BECAUSE I THINK PEOPLES' HEALTH AND OUR PLANET WELLBEING ARE AS IMPORTANT AS WELLBEING OF ANIMALS??
I don't want to call myself pseudo vegan or diatery vegan as I want to promote this idea as widely as possible. And even if I wear 6-year old leather shoes (and I'll be wearing them as long as they are good because I live in a poor country and can't afford buing new non-leather boots just to show off i'm a vegan) I'll call myself vegan no matter if some other "TRUE VEGANS" like it or not..
I like your blog generally but after having read this article I'm really upset :( I don't think such a fundamentalizm can do any good..

I'm happy for people to stop eating animal products - even if it comes through the threat of global warming!

I'm just not happy to call that veganism, because veganism is more than a diet.

So how such people should call themselves? Pseudo vegans? Invent totally new name for it? Does it make any sense? Will it help broadcasting the idea? I seriously doubt it.. :(