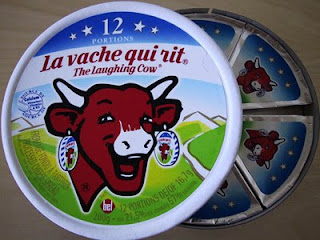 I land in Sydney and am picked up by a little darling; Andra Muhoberac of the Vegan Society of NSW. She takes me to Greg McFarlane’s home, who on that day became the new president of the Vegan Society of NSW. He is warm and welcoming – it was Love at first hug. We had some seriously good philosophical discussions on abolitionism, utilitarianism and veganism. We take a break to watch a few comedies on tv –a little comical relief is very welcomed from the solemn reality of our deeply speciesist society. But there’s no escape! An appalling commercial comes on showing a happy dancing cow and the brand name of cheese is called “Laughing Cow”. This worldwide brand, originated in France, depicts a cow with a jovial expression, wearing earrings and winking her eye. It is even more atrocious than the similar types of commercials in the U.S. portraying happy cows. Commercials like these are the same as depicting concentration camp victims with a jubilant expression.

Andra takes me to some vegan restaurants; all Asian and the food looked too fried and oily. I finally chose to eat at this little take-out place called Iku (which I found to be icky). The food looked appetizing, but sadly it did not taste like it would convert nonvegans to wanting to eat vegan food. Apparently they are vegan-owned but you don’t have to be vegan to work there, and there are quite a few of them in . I did, on the other hand, enjoy the Australian (vegan) Bounty Burgers!
I had advertised an event in , and although the attendance was small, it turned out to be a wonderful event anyway. I read some of the poems from my book; Metamorphosis and spoke about being a vegan activist for 3 decades. Somehow I got the bravery to finish with a song called The Animals’ March Song – that was sung by a group of marchers in the March for Animals in in the 80’s. Everyone was very touched with the finale! Supreme Master TV filmed and then interviewed me for their Supreme Master TV. They wanted me to end with Go Veg – Be green – Save the planet. I said I could not say “go veg”; because I don’t promote vegetarianism. I ended with “just say no to violence – save the planet – be Vegan.”
Andra took me to the airport, she didn’t just drop me off, she went in the whole way and sits with me until the plane takes off. I squeeze myself, am I royalty? She brought a tear to my eye when saying that I blessed their lives in . 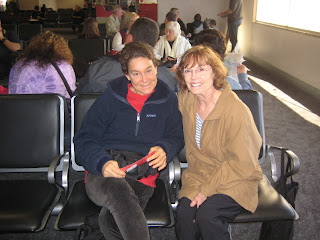 (Andra Muhoberac sitting with me
at Sydney airport.)
Off to . I’m picked up by Amanda Benham; owner of The Green Edge. I loved it!!! EVERYTHING was vegan in the whole store. In one night, I can see Amanda is a serious vegan advocate. We go to deliver some vegan cheese to an online customer, and I learn that Amanda just loves vegans, making vegans and helping vegans, and I just want to help her! She shares life with two lovely vegan dogs; and Red. I’m not a drinker, but I shared some vegan wine with Amanda and enjoyed her very vegan understanding, or should I say overstanding. I met her daughter in the shop. Kamyna is a life vegan of 22 years. She’s a lovely; good representative. I later met the son, and both kids have always wanted to remain vegan. Lucky Amanda! But it probably wasn’t luck; she instilled good values into them.
All products at The Green Edge are vegan, fair trade, organic and the place is all about sustainable living. I tried incredible dehydrated raw crackers and a raw fermented cashew cheese that was divine. (I went to a raw food potluck in Sydney - the food was not as good, none of the people were really vegan, but just ate raw food for health reasons; one girl even ate raw fish (yuck). The raw desserts were fantastic.)
The Forest vegan café and lounge in said the owners were vegan. I was happy to hear that and told my friend. She said go ask him ‘if I had an event here and people wanted cow’s milk, could they get it?’ Sadly, he answered yes. Veganism is really losing its meaning in the world; it’s disheartening. We must work stronger to uphold the true definition of a vegan. I met up with some vegans at The Loving Hut in Brisbane...it had a wide variety of food; ALL plant-based! (Loving Huts are a worldwide chain by the Supreme Master people) I have a hard time getting used to the white sugar used in all the food. Being vegan in the U.S., I never ate refined white sugar, but in Australia it is vegan and widely used in all the vegan food products. I guess I'm spoiled; the last two vegan restaurants I ate in were The Millennium in San Francisco and Sublime in Ft. Lauderdale; both exquisite (and expensive) dining!
I found my way to a retreat amongst Australian wilderness, wallabies and all, owned by some vegan friends in Noosa; on the . The little dog, Lily, chose to leave her person and stay with me that very first night we met. This was not part of the plan, but magically I am enjoying this peace and solitude in the company of a little vegan dog that exudes happiness and is on my lap now as I type. I feel blessed by her presence. 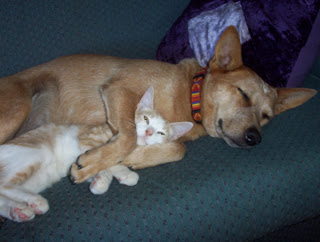 (photo left: "Red" vegan dog for
9-10 years, cuddling with Kismet
the cat. They live with Amanda Benham
owner of the not-for-profit store: The
Green Edge, in Brisbane, Australia.) 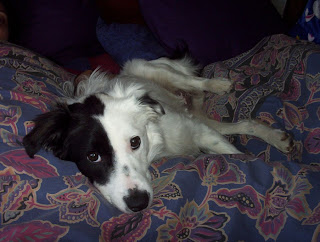 (photo left, Sheba, fed vegan and is
about 10 years of age. She is the good
friend of Amanda Benham; owner of
The Green Edge in Brisbane, Australia.)
Posted by M. (known as) "Butterflies" Katz at 7/23/2010

Email ThisBlogThis!Share to TwitterShare to FacebookShare to Pinterest
Labels: Vegan in Australia