THE BASIC RIGHTS ALL ANIMALS DESERVE 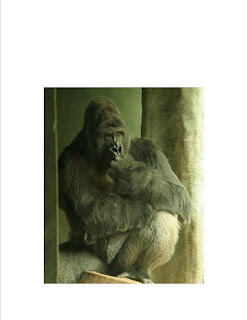 Many people (including many vegans) believe primates or great apes deserve to gain their rights because of their similar intelligence to humans. I don’t believe rights should be based on intelligence, but on having awareness, feelings, and the capacity to suffer. Some nonhuman animals have more intelligence than some humans; for example a child or mentally impaired person. Would we not give rights to these humans? I also believe all animals have personhood and therefore should not be considered an object that humans can legally own.

In addition, humans are not as intelligent as they presume themselves to be. With a history of war and destruction like man has achieved, I’d say humanity is not as wise as most other animals. We don’t even know how to get along with others that inhabit the same planet, while the other species exemplify a better understanding of harmonious living. When it comes to not fouling your own nest, the other species far surpass humans. The moral of the story is humans maintain an unjust human supremacy position.

If humans were, in truth, intelligent, they would not blind rabbits to test mascara. If they were intelligent, they would see the obvious; that an animal is not food or a pelt. An infant knows this. Thus far, as a species, humans have not been able to grasp this simple concept, thereby proving their lack of intelligence. If humans are the most intelligent of the species, why do they work their lives away; 40 hours a week for money while all other species just enjoy “being"? Other animals live their life on a level that is above the human pursuit of attaining money. If humans are so intelligent, why do they persist on habitually staying in their present perspective instead of trading it in for an improved one that would benefit the planet and all its inhabitants?

I never met a dog that I couldn’t, within a day or two, get to eat vegan; on a regular basis. They soon learn to trust the gentle, loving, vegan human that feeds them, and so they go for it with gusto. If canines can thrive on a plant-based diet, then certainly all humans can. We need to be open to the Truth that all sentient animals deserve the fundamental right to live their life without being used for human purposes. No conscious animal; human or nonhuman, should be enslaved, falsely imprisoned, bred into existence only to be commoditized, tortured, exploited, and brutally murdered. I'm sure in your heart-of-hearts and reasoning mind, that you will agree.

This is so beautifully said; so sensible and, dare I say it, Intelligent. Thank you.