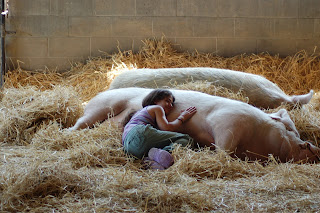 One can’t logically be for animal rights while paying someone to rape, enslave, and brutally kill nonhuman animals. On a daily basis, non-vegans (including vegetarians) pay someone to do just that. For those who want to be an animal rights activist – become vegan. Vegans actively protest the shocking behavior of humans towards animals - 24/7.

Some animal rights people identify with being vegan, but they “cheat”. Cows are perpetually kept pregnant, hand-inseminated, and endure torturous conditions. “Cheating animal rights activists” should consider this before they partake of some cheese or pizza. Living a vegan lifestyle is a moral foundation; especially for those who are an inspiration to others. It’s not difficult to be a vegan if one grasps how profoundly meaningful it is. Some activists work to save the whales, while they contribute to the persecution of cows. People want to punish others for their ‘cruelty to animals’ while they are cruel to animals every day by consuming animal products. Being members of an evolving human race, it becomes our obligation to change - in order to advance human consciousness.

It makes much more sense to spend our time, money and resources to promote non-violent vegan education, encompassing all animal rights issues, instead of working on bettering the conditions within a system that should simply be abolished; a system that stems from a misinformed culture. We must unite and work for empty cages, not better cages. I don’t believe in extending ‘a pat on the back’ to institutionalized exploiters because they enlarged the prison stalls where they hold innocent animals captive or because they agreed to use cage-free eggs. It makes more sense to change the mindsets of people; the purchasers, who are creating the demand for these products.

Veganism and animal rights are synonymous; and, not a ‘wavering’ - “when it’s convenient” type of veganism that some organizations espouse. They are lowering the standard of the Vegan Ideal; to the point that they are replacing the word “vegan” with “vegetarian”, which has come to mean dairy consumption, etc. Dairy cows are kept in hideous conditions. It’s sad that humans are so out of touch with their natural feelings of compassion; so much so, that they could be complicit in this crime against nonhumanity. We cannot rise to who we are meant to be, if we are inflicting (or paying someone else to inflict) misery on others. We free the animals and our own higher nature by living vegan.

Vegans do oppose factory farms, however if there were no factory farms, most vegans would still be vegan. Veganism is a protest against a speciesist society that believes nonhuman animals were put here for our use, to be our property, to be subjugated by us. There is no such thing as humane enslavement, exploitation or murder. There is nothing “humane” involved in farming animals, even if a product is labeled “humane”. These labels are merely marketing schemes to make people feel good about themselves while they directly support cruelty. So called “humanely raised” animals have a number of torturous practices inflicted on them. “Free-range" farmed animals are still subjected to excruciating mutilations without painkiller. They are still slaughtered in the same violent way as factory-farmed animals. Sentient beings are filled with fear as they are prodded down a narrow chute. They can hear and smell what is happening to those before them. They desperately try to turn around, but can’t, until it’s their turn to be sadistically murdered. The whole abysmal system must be abolished and that is the only solution worth working for.

All forms of slavery MUST be abolished, including: child slavery, indentured servitude, forced marriages, debt bondage, human trafficking to serve sexual slavery, and the mass enslavement of nonhuman animals. All life forms deserve the unquestionable right of liberty. There are more (human) slaves than any time in history! The numbers of nonhuman slaves seems beyond calculation. The history of man is appallingly oppressive. It is difficult to end slavery in Sudan if you live in the U.S., however, one can choose to live vegan - a universal protest against slavery. Vegans do not pay someone to enslave, rape, exploit and kill other conscious beings.

I understand the anger of ‘militant vegans’. However, we should redirect our anger and use it to educate others of the many benefits of vegan living. We need to lead by example that there is a better way. I’m suggesting that evolution be our form of revolution. Let’s bring about a gentle world, where no one lives in fear. There is a lot of internal conflict between the differing factions of the animal rights and vegan movements. If we all were vegan, (not pseudo vegan), we could achieve that much needed unity to actually win rights for animals. We carry our veganism with us 24 / 7 - it is the most genuine form of animal rights activism.
Posted by M. (known as) "Butterflies" Katz at 10/16/2009

Email ThisBlogThis!Share to TwitterShare to FacebookShare to Pinterest
Labels: Veganism is activism